May 23, 2014
It’s the penultimate round of the NBA Playoffs and as it’s supposed to be, the top seeds in the East and the West at the end of the regular season are the ones battling it out for the coveted tickets to the Last Dance. It has been an entertaining Conference Finals so far despite San Antonio’s trampling of OKC.

But aside from the final score, updates, and the highlights, other equally fascinating stuff has been happening. Trivial or not, they’re all part of the adrenaline-pumping post-season experience. Since we’re suckers for anything basketball-related, we decided to make a Power Rankings of the random and sometimes incoherent things that have transpired in the Conference Finals.

We aren’t sure what he’s going for here. We’re no fashion experts by any stretch, but we know that it doesn’t look good. It’s like, uhm, you know that, like uhm…bah, we tried. There are no words, Mr. Wade. 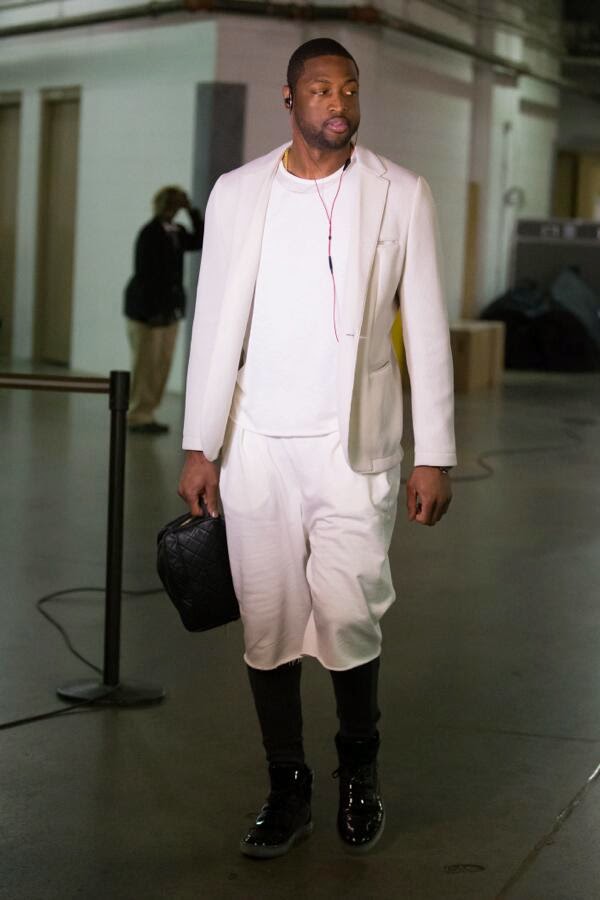 9. Hot ladies in the Draft Lottery

Wait, what? Yep, forget those trendy bars, hip coffee shops, and high-end clubs, the best way to spot fine ladies is the NBA Draft Lottery. This doesn’t have to do anything with the Playoffs but we feel it’s worth mentioning.

Are you familiar with Mallory Edens? How about Anjali Ranadive? We weren’t before as well, but after their appearance at the said event, well, let’s just say we’ve Googled them more than once. Mallory (she’s just 18, BTW) represented the Milwaukee Bucks, being the daughter of owner Wesley Edens, while Anjali, an aspiring recording artist, represented the Sacramento Kings as the daughter of owner Vivek Ranadive.

The Cleveland Cavaliers may have gotten the precious number one pick, but the Bucks and the Kings surely stole the spotlight. Any new stalkers, er, fans out there?

Coach J is back in the Playoffs! But as an analyst for ESPN after getting the pink slip from Golden State. He’s reunited with Mike Breen and Jeff Van Gundy, completing their entertaining-as-hell trio. Jackson may not be the best out there (Hubie Brown still gets our vote), but he sure has insightful observations, honest opinions, and most of all, cool catch-phrases. Momma, there goes that man (again)!

OKC are you still OK? Lame jokes aside, it was pretty amusing to see Russell Westbrook gesturing to Kevin Durant to keep his mind straight late in the first half of their Game 2 beatdown against the Spurs. That would be like Robin hollering at Batman to stop acting like a teenager. Perhaps KD was falling asleep because Russ was taking all the shots, finishing with a 7-for-24 stinker. Russell Westbrook, ladies and gentlemen.

Have you seen Chris Bosh lately? He’s been as efficient as a wet tissue against Indy in the Conference Finals (he’s only averaging 10.5 PPG and 4.7 RPG against the Pacers this season). Lucky for him and the Heat, another Chris has been picking up the slack. Birdman put up 8.5 PPG, 8.0 RPG, and 1.5 BPG in 23.5 minutes in their first two meetings, while providing countless intangibles on the defensive end. He chased loose balls, boxed out, and challenged shots. According to ESPN, the Pacers were an atrocious 12-of-41 from the field (29%) with Andersen on the court in Game 2. Fly high, Birdman! Also, shout out to Norris Cole.

It’s no secret that Indiana is a basketball hotbed. That’s why it shouldn’t come as a surprise that Pacers fans are as rabid as they can get. They genuinely hate the Heat and they let ‘em hear it. They shower them with endless “booos” and affectionately chant “He’s a flopper!” at LeBron. The NBA post-season is incomplete without the home crowd’s antics and we fully appreciate the Pacers fans’ efforts. Hey, they did have the best home record in the regular season.

Have electricians on standby because Green has been shooting the lights out. He buried seven of his 10 three-point attempts against OKC in Game 2 to lead the Texas Massacre. He has now shot 15-of-21 from long range (71.4%) in their last three games and the Thunder can only hope that he’ll cool down soon.

Lest you forget, the former Tar Heel holds the NBA record for most long range bombs in the Finals with a total of 27 against Miami last year. So he’s not new to shooting in pressure-packed games. He had a mediocre regular season, no thanks to injuries and the stellar play of Marco Belinelli. But he has regained his stroke and Pops has given him the green light (he shot a top-of-the-key three in Game 1 despite being outnumbered on the break). Perhaps he can teach Thabo Sefolosha a thing or two about shooting the rock (a whopping 0 points so far in the Conference Finals).

Oh, Lance Stephenson, what do we do with you? He has been terrific against the Heat, especially in Game 2 when he almost single-handedly carried the Pacers with a masterful 25-6-7 effort. But despite his valiant display, the thing people highlighted the most was his hilarious acting job late in the third quarter when he and LeBron “collided.” He literally just lay on the court for 12 seconds (believe us, we counted), pretending to be badly hurt. This prompted JVG to aptly mock him as “Born Actor.”

It’s so funny and audacious that we had to put it high on our Random Power Rankings. Flop so hard, mutha-NBA wanna fine him $5K. Don’t change, Lance. Don’t ever change.

Heading to the fourth quarter of Game 2, the Heat were down, 63-62. Stephenson was playing well, Roy Hibbert was imposing his will on the defensive end, and Paul George was ready to explode. But then LeBron and Wade decided to turn on their switch. After just scoring 10 points in three lethargic periods, LBJ went on kill mode, putting up 12 points and a couple of crucial assists (please, can we stop the ridiculous “choker” tag already?). Wade, meanwhile, added 10 to his team-high 23 markers, including the game-sealing dunk off a backdoor cut and ‘Bron dish.

What was a winnable game for the Pacers and the chance to bury the Heat in a 0-2 hole quickly dissipated in the final 12 minutes. Whenever LeBron and Wade have that mindset and killer instinct, especially in the payoff period, it’s almost impossible to douse the Heat. We could wax poetic about the brilliance of LBJ and The Flash, but there’s no need for saccharine soliloquies or highfalutin hyperboles, they’re just too good.

They’re old, they’re slow, they boring, etc. The Spurs have heard it all. But here’s a news flash for you: They’re not! In fact, it is the Thunder who look old, slow, and boring on the court. San Antonio has manhandled OKC in their first two meetings by an average of 26 points! The term “blowout” doesn’t do it enough justice. It has been an abomination, obliteration, the antithesis of a gentle reprimand.

Just in case you haven’t noticed, the Spurs are doing it will unselfishness. It sounds simple enough, but when you have five guys on the court, the concept is not an easy sell. But that’s what different about Pops’ wards, they know that constantly moving the ball is the best way to disrupt the defense. In their pair of wins, they averaged 27.5 assists. That’s at least 55 points per game! It’s just beautiful to watch.

Oh, as for Tim Duncan, Tony Parker, and Manu Ginobili, they now hold the NBA record for most playoff wins by a trio with 111 victories, surpassing Kareem, Magic, and Michael Cooper and by a slim margin, Boris Diaw and his man boobs.