Age doesn’t matter in love, especially if it’s basketball you heart. Just ask Mary from South Florida. We don’t know her age but we do know she LOVES the Miami Heat. Here’s a video of her animatedly and anxiously watching Game 5 of the Eastern Conference Finals, where unfortunately, the Indiana Pacers defeated her most beloved team in the galaxy.

She only had sweet, sunshine-y things to say just like any other grandmother:

“Where’s the referee? Tell him to get his glasses on, get a microscope, anything, see!”

“I hope you don’t sleep tonight.”

And the sweetest of ‘em all and our absolute favorite:

“Stephenson, fall on your face.”

Watch out, San Antonio! Feel her wrath! To paraphrase the revered linguist LL Cool J, grandma said knock you out!

Just in case you’ve been living under a rock that is buried under the sea that is yet to be found in Venus, the Indiana Pacers were knocked out of the Playoffs. But that doesn’t stop Stephenson from making a mind-blowing impact (emphasize on “blow”). He’s so good and born ready that he can still decide the outcome of a hotly contested and highly critical game even if he’s not playing.

Why you no invite? 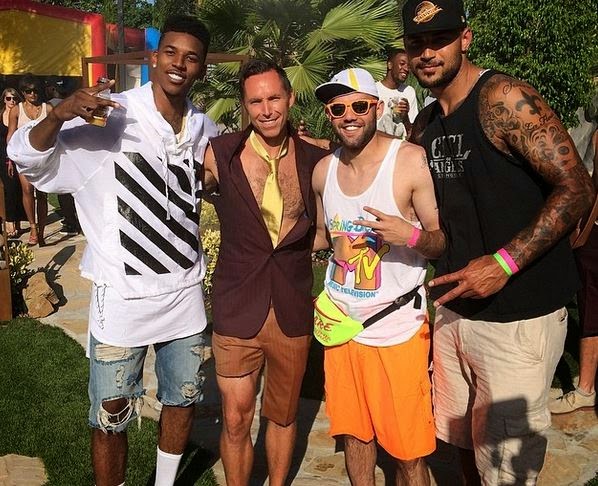 Swaggy P held a 90s-themed party for his 29th birthday and of course, he invited all of his teammates. Robert Sacre looks like he didn’t RSVP and dressed quite normally, Jordan Farmar threw on, well, a 90-ish get-up (you can tell we’re not fashion experts), Nick Young’s attire is probably his everyday clothes, and Steve Nash is supposed to be Barney from Flintstones. We, however, firmly believe that Stevie’s costume would suit Chris Kaman better.

While Young is busy hosting 90s-themed soirees, Iman Shumpert is busy dropping rap songs. He released a short music video, which reminds us of an incoherent, unsettling blend of A Clockwork Orange, Saw, and Miley Cyrus’ live performances. His rapping isn’t bad though and we’d love to see Phil Jackson bobbing his head to it.