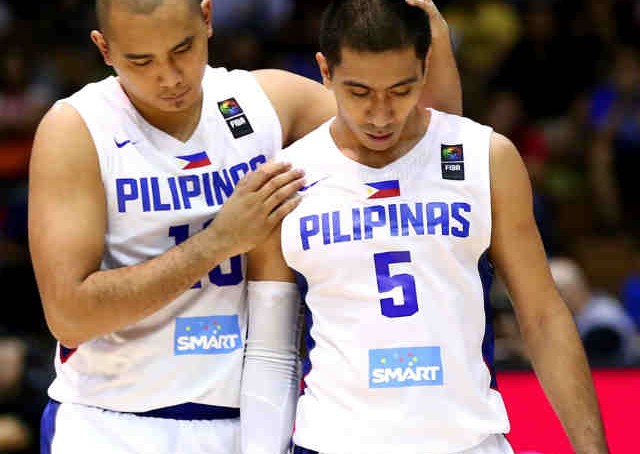 In lieu of hardware, here are five priceless lessons that Gilas players, coaching staff, and diehards should take away from the disappointing stint, which may come handy for the FIBA Asia Championship next year:

It’s not just about sending the best players, no.

Winning in international competitions requires year-round training and funding. An adjusted PBA season schedule to give the players more time to rest and train properly is a good start. How about government funding? A Presidential Adviser for All Things Basketball, perhaps?

At this point, anything resembling some sort of Gilas system drawn up by the PBA and the Philippine Sports Commission–as opposed to the Let’s Beg For Players Initiative–will do us good. MVP, for all his efforts, can’t do it alone.

This suggestion is nothing new, and although the recent Gilas run was promising, the problem was again exposed.

Because if we truly are a basketball-crazed nation as the world perceives us to be, then support for the national basketball team, and to the players who sacrifice so much, shouldn’t only begin during tipoff and end at the buzzer.

The fans are investing so much time and emotion (that’s probably all we can afford) and the team is putting in all the hard work to the games, it’s probably time someone up there other than the basketball gods do something about the country’s sports development program.

For starters, how about declaring September 27 a holiday in honor of our second national hero, Jimmy Alapag?

2) Jimmy Alapag is the boss

Speaking of Alapag, if until now, you do not have the utmost respect for the Gilas captain, then please do us all a favor by getting off the Internet and jumping off the nearest cliff because, frankly, you do not deserve life.

The 36-year-old Alapag showed legendary composure, leadership and, of course, heart in the past two months, that he made the other point guard, Mr. Jones Cup LA Tenorio, look like a rookie.

Tenorio, obviously, is a national team hero in his own right in previous tourneys, but for the FIBA Worlds and Asiad, Alapag showed everyone who’s boss.

He became the best PG in Asia (sorry, Jayson) in August and a living legend (sorry, Jawo) in September.

Alapag showed each time he was on the floor that he is out there to win at all costs, regardless of the odds.

Even if it meant breaking his shooting arm after all those earth-shattering 3s, even if it meant giving an assist to Marcus Douthit to score on their own basket for a chance to advance.

Sunday was probably the last time we will see Alapag wearing a Pilipinas jersey. But we can sleep better at night knowing that Tenorio, if he chooses to continue playing for country, has learned from the best.

Alapag will be sorely missed, and hearing Magoo Marjon’s “BAANGG!” won’t be the same again.

But when doubt and despair strike, we can find comfort knowing that Alapag highlights will always be on YouTube, and his long bombs are, metaphorically, the cure for anything insurmountable. Even cancer.

3) Iranians are tall, Koreans can shoot

Making taller babies who can shoot like Allan Caidic is a winning strategy for future Asian competitions.

In the meantime, Greg Slaughter should be locked up in a room with Nowitzki highlight videos playing on loop, and start practicing those step-back, contested jumpers from behind the arc.

Puso will only get us to the last two minutes of the fourth quarter, but winning will take much more than the actual will and determination to win.

It boils down to execution and making the right decisions at crunch time.

Also, passing the blame and singling out a player to motivate him at the height of the tournament can be risky and may or may not work. This goes for fans as well. We are not in a Mighty Ducks movie.

FIBA took notice too. Because cheering for the underdogs is no easy feat. It takes equal amounts of faith and loyalty with a dash of craziness to egg on an undersized team going against the Haddadis of the world.

This is one thing that will not change, regardless of the outcome, and for that reason alone, those who are planning to wear that Philippine jersey like a badge of honor can always count on undying support from the fans.

Sure, the blame game doesn’t go away, but the more rational and discerning fans will always deliver suggestions on how to make the team better, and not just spit snarky comments.

Heartbreaking losses from the FIBA Worlds and Asiad proved just that, and this much-needed experience drew a thin line between fair-weathered bandwagoners and legit Gilas Pilipinas believers.