With social media’s reach as expansive as Kevin Durant’s wingspan, it’s almost impossible to keep up with all the fascinating posts online. It can be quite exhausting. Like playing through five overtimes. Peripheral Vision takes a look around the web to select some of the more interesting items so you don’t have to. No complex scouting process here though. Just a lazy and quick survey of the vast digital hoops community.

Our deep gratitude to you too, MVP

While a lot of frustrated Pinoys are calling for the head of Gilas coach Chot Reyes, Gilas godfather and overall good guy, Manny V. Pangilinan came to his aid. A day after Gilas bowed out of contention in the Asian Games, MVP posted a series of tweets, defending Reyes and the squad.

Chot, to each and all of you my deep personal gratitude for what Gilas has accomplished- in Manila last yr and in Spain and Korea this yr.

MVP has always been the unsung hero for Gilas and we all should acknowledge his immeasurable help. If he still rallies behind Coach Chot despite the travesty in Incheon, don’t we all should too? Let’s all hope MVP never gets tired of supporting our national cause. You the real MVP, MVP. No really, you’re the real MVP.

A cheetah will make it as an NBA skills coach someday

We all learn our favorite basketball moves from players we idolize. Tongue-wagging lay-up from MJ. Crossover from A.I. Kalawit rebound from Nelson Asaytono. Kili-kili shot from Johnny A. But Kobe Bryant? Ibahin niyo siya. Or as linguists would say, change him. He doesn’t copy his moves from his predecessors. He gets his inspirations somewhere else—like the Serengeti maybe.

In an interview with the New York Times, Kobe said he honed the form of his patented fadeaway jumper from a sprinting cheetah. We hope he’s just trolling reporters but he’s not. He’s dead serious. Like his game face during a Game 7. Always enigmatic, this Kobe guy. It makes perfect sense though because obviously, Greg Ostertag mastered his skills from observing beluga whales. 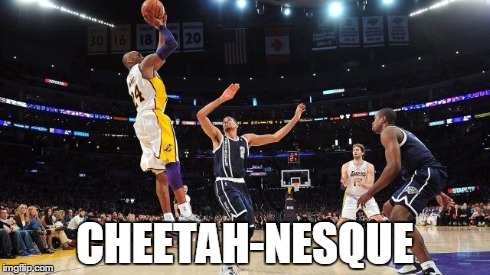 No Tiger blood, no foul

James Yap should do this with Rommel and Daniel Padilla. Or Ramon Revilla Sr. and one of his 93739720 sons.

Nothing says “eat healthy” better than Dikembe Mutombo swatting away your junk food.

The new PBA season will open doors next month and teams are gearing up with various preseason games and bonding sessions. Brgy. Ginebra, minus Japeth and L.A., recently wrapped up its team-building in some adventure park in Cebu.

Here’s a groupie of the Kings before riding a zipline. While this won’t help them execute the Triangle Offense better, it’s still a lot of fun—as evidenced by Mac Baracel’s pouty lips. The question is: ‘Di ba sumayad lang ‘yung paa ni Slaughter?