October 2, 2014
We saw the worst finish ever of a Philippine national team in the Asian Games. But one Gilas fan saw something else, and it was something we didn’t see on TV.

This Gilas fan didn’t watch the games on TV. She didn’t even bother searching for live streaming sites so she can watch at work.

Tech Apognol, a part-time teacher and full-time graduate student in Korea University, instead skipped class and rearranged her schedule for one week during the Asian Games.

“Sobrang hirap puntahan talaga because the buses from subway take an hour to the stadium. We couldn’t afford the $20 cab ride lagi,” she said.

She did all this para sa bayan. And she wasn’t alone.

“Most of the fans in the stadium were workers who didn’t go to work. One fan, a middle-aged woman who watched with her husband, told me she had to leave work for the Iran game. I also met two fans inside the bus and found out they flew in to Seoul just to catch the Korea game. Akala ko hardcore na ako, may mas hardcore pa pala,” she said.

The cheers of Pinoys in Incheon, Apognol recalled, got so loud at one point that they were told by a Korean staff to tone it down.

“Homecourt advantage for Gilas. Filipinos from all over Korea came to watch,” she said.

In the game against host South Korea, the most valuable Pinoy fans even cheered louder than the home crowd.

“Whenever they’d cheer the famous ‘dae-han-min-gook’ chant, Pinoys would scream ‘puso‘ or ‘Gilas’ loudly. For me, it was the ‘moment.’ It’s like telling the Koreans: this is how we love our basketball team,” shared Apognol.

Some fans, however, were not as lucky as she was in getting tickets to the games. Apognol blamed the poor ticketing system, which claimed games were sold out when they weren’t, forcing hundreds who travelled for hours to head back to their respective cities.

The losses to Iran, Korea, and Kazakhstan tested the true characters of fans who say they support the team.

But more importantly, the losses also tested the players themselves. Will they crumble in defeat? Will they give up on the team? Will they quit? Apognol, who observed the bench from where she was sitting, said the players did a very Pinoy thing by standing by each other.

“They were rooting for each other. They would stand up and cheer with the crowd when there was a nice play. Pingris was very team captain-ish especially during the fourth quarter, always calling for a huddle and pep talk,” she said.

As the assigned team captain, Alapag also did his part–aside from hitting 3s–by helping his teammates on the court.

“During the practice run vs Iran, I saw Jimmy helping out Gabe with his jump shots and 3 point shooting,” Apognol said.

Most Gilas games have a familiar pattern: they carry a big lead entering the fourth, only to lose it in the closing minutes.

This is the exact moment when fans turn against each other and shout four-letter words that rhyme with “tuta.”

In Incheon, the scene was pretty much the same.

“It freaked me out. I’m the kind of fan who sticks to the team manalo, matalo,” she said.

Things took a weird turn after the game against Kazakhstan, which Gilas won–but really lost. To advance to the semis, Gilas had to win by at least 11 points, but they found themselves up by only 2 with a few seconds left in the game.

The solution? Score on your own basket, send the game into OT, and win by 11 there. But this strategy, which failed, did not sit well with some fans. The mere attempt offended them.

The vibe in Incheon, where fans saw the coaches face-to-face, became “awkward,” as Apognol described it.

“While waiting for the players post-game in Kazakhstan, coaches Chot and Jong came out to greet the fans waiting at the bus. One fan screamed, ‘Huwag kayong magpa-picture jan!’ Some fans agreed, laughing. It was really awkward, not sure if Chot heard it. But most of the fans asked for a photo op with both coaches,” she said.

For her, blaming the coach is unfair, and a concept she cannot grasp.

“Why single out Chot Reyes, the one who led Gilas in the 2nd runner-up finish at the FIBA Asia Cup and the first World Cup win? Sorry, pero hindi ko talaga ma-gets ang mga tao,” she said. 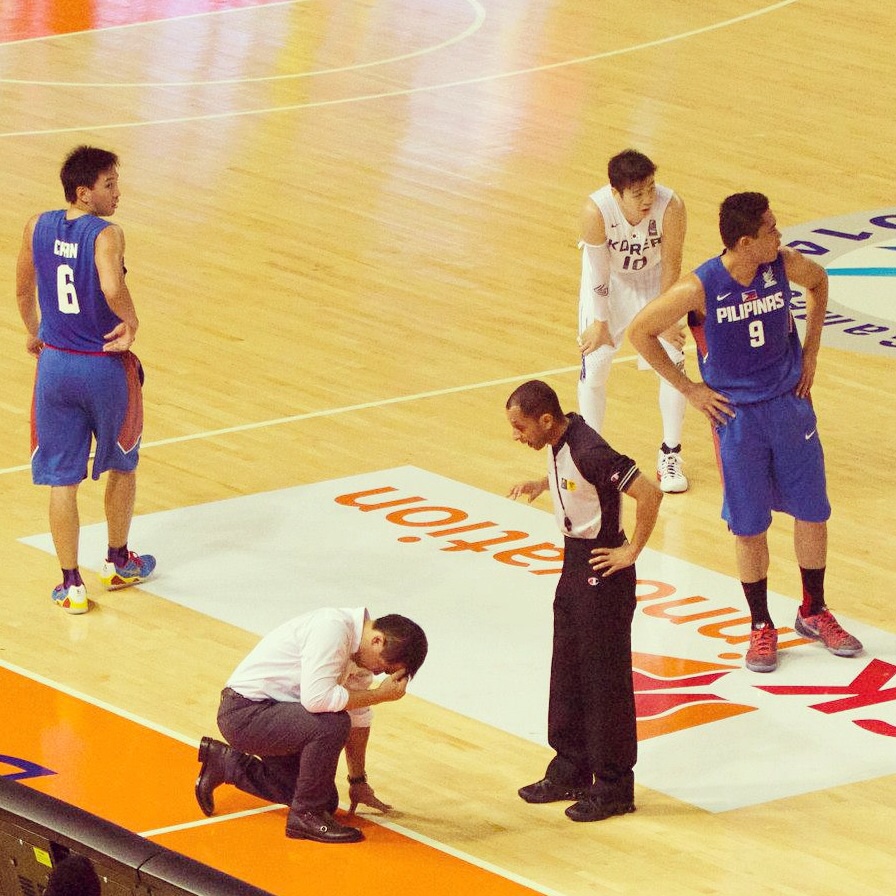 Post-Asiad, the to-do list is longer than ticking off people to blame.

“Make the Gilas tryouts tougher and I hope the entire PBA group will really give support to the national team,” Apognol suggests.

Apognol, a self-confessed hardcore basketball fan, learned a lot in her Asian Games experience. She put in the time and effort to represent her home country in Incheon.

She brought with her a Philippine flag and waved it proudly despite the odds. And she is willing to do it all over again.