June 29, 2015
On March 20, 2013, James Blair ran to the court, high-fived LeBron James, was escorted out by security, went to jail, and was banned for a year from the arena. BuhayBasket caught up with THE LeBron James fan to ask him: What do you think of LeBron’s haters?

“When I found out LeBron was returning to Cleveland, I was actually at work listening to the radio. As soon as they announced it, I left work early and drove to Cleveland, and just celebrated with all the people in the city. It was a great day to be a Cleveland fan.”

These words could’ve come from thousands of ordinary Cleveland Cavaliers fans who celebrated the return of their hometown hero. But James Blair is no ordinary fan.

Blair, an Ohio native, became a LeBron James fan when he was 10 years old, and LeBron was a high school phenom in Akron. He said he admired the King’s “game, and the way he handled himself.”

“From that day on I have been a LeBron fan following and supporting him every step of the way,” he told BuhayBasket.

Things changed for many ordinary, so-called fans of LeBron when he announced The Decision in 2010. But then again, James Blair is no ordinary fan.

“Initially I was upset, he wasn’t going to be playing for my hometown team anymore and wouldn’t be able to see him play live as much. I didn’t agree also with how he did it, but at the end of the day, I am a LeBron fan and I was going to support his decision, and support him on his journey no matter where he went,” Blair said.

But on one fateful night (See: Exhibit A), Blair took matters into his own hands, and decided that he had to personally tell LeBron that the city wants him back. 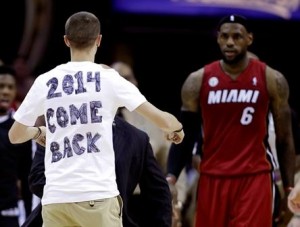 “I believe it was a huge moment in sports and if he can bring a championship here as well it will be one of the best stories in sports of all time,” he said.

Being part of “one of the best stories in sports of all time,” however, comes with a price, and Blair understands that the criticism thrown LeBron’s way has helped him grow as a player.

“I think it has a lot to do with the era we live in today with social media being such a huge factor in everyday life. It allows a lot of people to voice their opinions across a broad audience that in, say, the Jordan era wasn’t as easy. I would love to see Michael Jordan or other hall of game players play in an era like today’s with social media…it definitely is a huge deal. But with that being said, I think it has also helped LeBron grow and develop as the individual and player he is today. As a fan, I embrace the debate. I love talking sports and debating it especially basketball, I don’t back down from any LeBron arguments and end up winning a lot of them as well,” said Blair, adding that social media is not all that bad, particularly in bringing fans together.

“I think it’s amazing that all across the world, fans can be brought together through social media and enjoy something like sports and being a LeBron fan. All I can say in terms of being a fan is enjoy it as much as you can! We don’t see players like LeBron James come around very often and the fact we can be blessed to watch and witness this in our era is something very, very special. LeBron will go down as the greatest all-around player to play this game and we shouldn’t take these moments for granted,” he said. 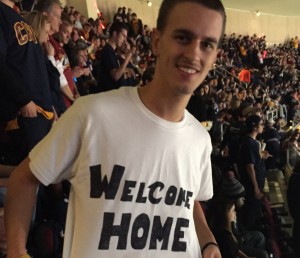 As for next season, Blair, who now enjoys the games from the stands like ordinary fans do, had this to say:

“It is unfortunate to lose and be so, so close, but I give this team a ton of credit. They face so much adversity and put together an amazing run. Hats off to the Warriors, but hopefully the Cavs can have a rematch next year and be fully healthy.”