July 2, 2015
It is around this time when everyone is a #FutureLaker and Woj is on God Mode. Welcome to NBA free agency.

The veteran center has reportedly agreed to a four-year, $52 million deal with the Phoenix Suns. First day on the job and Chandler was already helping the team by joining the meeting to woo LaMarcus Aldridge.

Sources: The Suns walked into meeting with LaMarcus Aldridge moments ago, armed with Tyson Chandler and his agreed upon multi-year contract.

What to expect: Just edit in Eric Bledsoe in place of Monta Ellis.

This is obviously not good news for the 60-win Hawks. The forward chipped in elite D and 17 ppg for them in the playoffs, but now he will dance with the Toronto Raptors to the tune of a four-year, $60 million deal.

#WeThe North I will be playing for Toronto Raptors next year!!!! I'm Blessed for this Opportunity!… https://t.co/pBK6NvRVcE

What to expect: An unhappy Terrence Ross.

It was only a matter of time before The Truth reunited with Doc Rivers. That it happened a season after Pierce’s (somewhat) heroic run with the Wizards, might be reason enough for (some) doubters to dismiss this three-year, $10.5 million deal as a non-event.

If your favorite team plays the Clippers in the playoffs, Paul Pierce will hit a game-winner and say this is why they brought him here. FYI.

What to expect: A Lance Stephenson-Paul Pierce web reality show. Also, more of this:

The Spurs are chill like that, with Pop “in bed” at the start of free agency and as expected, extending a former finals MVP to a five-year, $90 million contract. Looks like San Antonio won’t be needing a replacement drummer anytime soon.

What to expect: A title run, duh.

Kevin Love is going back to the @Cavs, saying they have "unfinished business." pic.twitter.com/m2d6DqHyHK

“We have unfinished business and now it’s time to get back to work.” This is the statement he gave after agreeing to a five-year maximum contract worth more than $110 million. And by “unfinished business,” he means taking out Kelly Olynyk with a jackknife powerbomb. 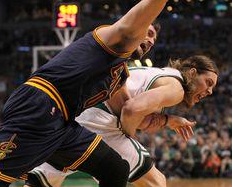 What to expect: A mid-season trade.

To be continued, obviously…