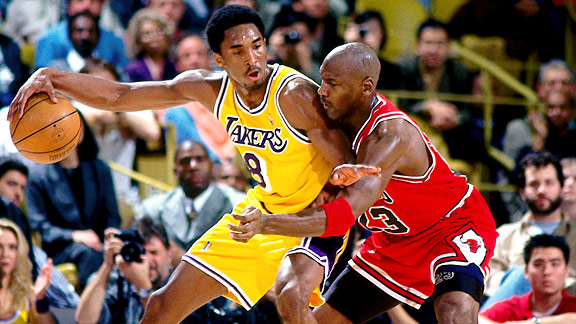 Tagged with starting 5ive, starting5ive
Spread the love
In the latest chapter of Kobe Bryant’s (very) entertaining farewell tour, he named the five toughest teams he has played against in his 19-year career.

Retiring Kobe is Honest Kobe. He has been more open to the media as of late, and according to LA Daily News writer Mark Medina, he recently obliged to name the five toughest teams he played against.

The Sacramento Kings formed one of the best teams in the early 2000s, but Kobe and the Lakers stood in their way to becoming a championship contender. The rivalry reached its peak at the 2002 Western Conference Finals, which was controversially decided in seven games. Shoutout to Tim Donaghy.

Kobe called it “epic.” Pop called it a “dogfight.” The Lakers-Spurs battles in the playoffs were guaranteed to bring out the best in both teams’ respective clutch performers. See video below.

The Lakers were having problems in 2004, despite (or was it because of?) having Payton, Malone, Shaq, and Kobe in its roster. Enter the Dumars-built Detroit Pistons, a squad that championed team ball and elite defense. The Lakers stole Game 2 thanks to Kobe’s heroics, but the Pistons won three straight at home in convincing fashion to win the title.

In his first trip to the Finals in the post-Shaq era, Kobe lost to the 2008 Boston Celtics, which then had the Big 3 of Garnett, Allen, and Pierce. The Lakers found themselves in the bad side of history after a 39-point loss in Game 6. Kobe, however, did have his revenge two years later.