Skip to content
Home
Uncategorized
Starting 5ive: Warriors are 5 wins away from 73

Starting 5ive: Warriors are 5 wins away from 73

 Only five teams stand in the way of the Golden State Warriors from squashing the ’96 Chicago Bulls’ record of 72-10. Can the Dubs beat these teams? (Spoiler: Yes. Yes, they can.)

Sixty-eight wins and seven losses. That’s how good the Warriors have been this season. With only seven games left, they have a legit shot at getting 73 wins, a feat no team has ever done before.

These are the teams that are standing in the way of history.

When these two teams met in December, Boston had a chance to put a stain on Golden State’s unblemished record. It had to take two overtime periods, but the Warriors escaped with a victory for win number 24. Steph Curry had a bad shooting night, only making nine of 27 shots from the field. He finished with 38 pts. It’s safe to say the Warriors will win this one for No. 69.

Only seven teams (so far) can print shirts that say, “We beat the ’15-’16 Warriors.” Portland is one of those teams, beating Golden State in February in convincing fashion, 137-105. Damian “Not An All-Star” Lillard dropped 51 in that game, but only shot 5-of-19 when the teams met again in March. When you scorch GSW, you can’t do it again, it seems. It’s safe to say the Warriors will win this one for No. 70.

The young and energetic Wolves (except you, tito KG) put up a good fight against the young and energetic Warriors when the two teams last met. Led by Karl Anthony Towns (24pts, 11rebs), Andrew Wiggins (25pts), and Ricky Rubio (20pts, 11assts), the Wolves kept it close until the dying seconds, but they came up short. Factoring in defensive adjustments (See: above), it’s safe to say the Warriors will win this one for No. 71.

SAN ANTONIO SPURS (One home game, one away game)

As long as Pop is running the show, and Timmy can still get up in the morning, the Spurs will always be a scary bunch. They proved it when they methodically sucked the fun out of basketball and held the defending champs to a season-low 79 points on March 19.

The Warriors should win one at home against a Mills-led Spurs on April 7, and the Spurs should get a win against a Barbosa-led Warriors on April 10. Warriors get win No. 72, the Spurs keep the home winning streak intact, and the stars are rested for that epic, 7-game WCF series. Everybody wins.

MEMPHIS GRIZZLIES (One home game, one away game)

In their first matchup back in November, the Warriors won by 50 points (!!!), handing the Grizzlies its worst loss in franchise history. The Warriors need to win only once–at home, at the last game of the season–to beat the Bulls’ record.

Somewhere, running off into the sunset, Andrew Bogut is already celebrating 73-9. 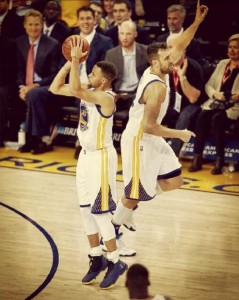