Skip to content
Home
Uncategorized
73-9: The brotherhood in Golden State

73-9: The brotherhood in Golden State

 Nobody ever imagined an NBA team losing nine games in a year. Nobody ever thought over a thousand three pointers could be made. Nobody considered, even for a single moment, that a team, led by an interim head coach, would be able to go on such a hot streak to start the season. Here we are folks. A new bar has been set by the Golden State Warriors.

Doubters started showing up when they said a jump shooting team won’t win a title, but that’s already been done. The haters kept calling for the era change as a catalyst for their dominance, but, then again, change is permanent.

Bandwagoners popped up, and the Dubs approached LeBron levels of hate. We started seeing Drayton’s = Donkey memes, people cheering for a Warriors loss, comically laughing at losses to lottery teams. There was so much hate, but it was love that kept the Warriors together on a path to success.

It started when some players backed Mark Jackson after he was fired. That was when the run of dominance really started. I read an ESPN article that talked about the Warriors having this group chat where the players got together without having to see each other to have a sit down players meeting. I wondered, “Really? Just a group chat?”, but I was brought back to my own phone by that statement.

I’ve always remained loyal to my boys from back in Xavier, and, even at our age of 30, we’ve maintained a group chat where we all still talk to each other almost every single day. All of us have grown to have separate lives. Some have kids, some are married or are about to get hitched, but the conversations still come full circle to how things were during the good and bad times when we were younger.

There was always a bigger sense of familiarity than normal, a huge sense of trust and love between brothers who have seen each other succeed, while also being with each other through loss and heartbreak.

These Warriors are exactly that way. Loss and heartbreak after losing the general that helped them become successful made them a stronger unit. Maybe rallying around Andrew Bogut’s disdain for Mark Jackson helped them become tougher, but the road led to the Steve Kerr hire, an MVP for Steph and Andre, and the first title in 40 years. People started talking if they could do it again, and, folks, it seems like we’ve only just begun. 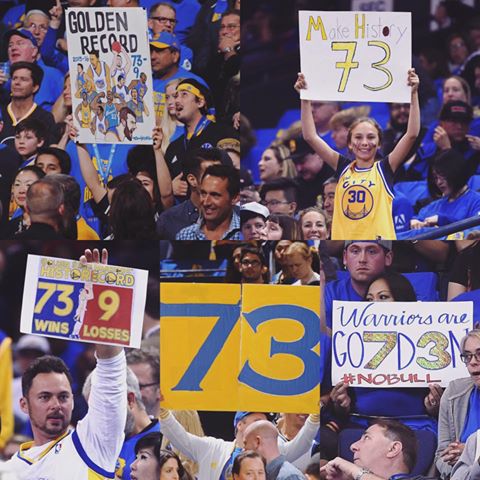 Some thought the Warriors would relax, coast through this regular season, then just kick ass and take names in the playoffs. Boy, were a lot of people wrong. Them boys started racking up the W’s, started making people sweat, and drew comparisons to some of the best teams of all time. Doc Brown would be happy to invent a train to fit the 95-96 Bulls, or the 00-01 Lakers to play against these Warriors, but we all know that it would never happen.

We can’t keep comparing eras, and we can’t keep basing things just on records alone. Life teaches us to move on, to grow, to be able to accept change, no matter how tough it could become, and these Warriors have done that with their beautiful brand of basketball that sort of reminds us of era foregone: the hockey assist (Pop’s Spurs).

The hard, somewhat dirty screens by Bogut, Ezeli, and Draymond (mid 90’s Pacers, Knicks, Heat). The way they look out for each other on the break (Showtime Lakers, Jordan’s comeback era). Bombing from 3 with no regard for human life (early 2000s Raptors, Bucks).

You could say they transcend eras and mesh the beautiful things together, or even make an argument that they destroyed the notion of what basketball really is, but these boys have only truly done one thing: the Warriors forged a brotherhood unlike any other.