At long last, the 2016 NBA Playoffs have arrived! As die-hard basketball fans, we long for these two months of excitement. The playoffs are a compilation of stories brought together by individuals who give everything they have to gain the respect of their colleagues, and attain their lifelong goals. Who wouldn’t appreciate stories that embody that?

So, we root for them, we cheer for them, and in extreme situations, joyfully cry for them. This year is no different. So many stories to follow, so many accomplishments to root for. What are we looking forward to seeing in this year’s playoffs? Here are top five in our list.

The best way to humbly say “I’m the best” without speaking, is to break a record. The Golden State Warriors have set the stage for this story by breaking the formerly “unattainable” 73 wins in the regular season. Will playoff records also fall this year?

16-0: The best playoff record isn’t happening with a lingering ankle/foot injury from Steph Curry. The 2001 Los Angeles Lakers went 15-1 on their way to winning a championship. Will the Warriors be able to at least tie the Lakers with only one loss?

63 points in a game: Most of Curry’s 40 point games have come within the first three quarters, then sitting the fourth quarter as his services are no longer needed. With close games in the playoffs, Curry will be putting in those extended minutes. Will Michael Jordan’s 63-point effort against the Boston Celtics in 1986 finally be the second highest playoff scoring game of all time?

Triple doubles: The record for most career playoff triple doubles still belongs to Magic Johnson with 30. LeBron James is next with 13. Russell Westbrook posted seven tripdubs alone in the month of March. He has four for his playoff career. He won’t reach Magic Johnson this year. But will he go on a monster streak and surpass Lebron for second all time?

GETTING MONKEYS OFF MY BACK

You work hard, and can’t reach your goal. You work harder, and still can’t get there. We’ve felt this frustration, and can’t wait to get to a moment when we finally reach our goal and “get that monkey off of our back.” There are plenty that are facing this in this year’s playoffs.

Griffin and Paul: Blake Griffin and Chris Paul may end up as one of the top power forwards and point guards, respectively, of all time. But Charles Barkley and Karl Malone can attest to this: if you don’t win a championship, no matter how good you are, you are never in the conversation as the greatest of all time. Blake and Chris have yet to get past the second round. Will this be the year they can finally get over the hump?

73 wins without the “*”: Just ask the New England Patriots, who went 17-0 in the regular season in the National Football League, but lost the championship. They are not the greatest team. The Warriors have endured year-long insults that great teams from prior years would have beat them. That argument can never be answered. But winning a championship will at least keep the argument going, until another team wins 74.

Finally, no more ticky-tack fouls, then going to the free throw line. Let them play, refs! We’re looking forward to more uninterrupted play. And, if they do go to the line, let the slashers in the lane earn the right to get an old-fashioned three-point play, by fighting off the hacks from 6’11 defenders. Oh, and don’t forget the cry babies who cry “foul” after being tapped. Let them cry without rewarding them. Who are we all looking forward to getting hit this year?

It’s completely silent, even though you’re in a room with 20,000 people. Hearts all beating at a faster pace. You sink the shot. The buzzer sounds. Sudden eruption of noise from that same 20,000 people, noise louder than an airplane engine. Heartbeats slow down, breathing consumes. Your teammates bury you in joy. Yes, the buzzer beater is the greatest action in all of sports. The NBA playoffs are filled with these events. With “Mamba Out” and his cohorts Derek Fisher and Robert Horry retired for many years now, who will take the reign of being Mr. Clutch for us this year and years to come?

At the age of 11, your mom and dad handed you a basketball. You shoot, and miss. You shoot again, and miss again. They say, “Don’t worry, you’ll get it next time.” After 10 tries, you finally make one. Your mom and dad smile, and you don’t want to miss ever again. The same effect happens when you’re 15, with your high school teammates. Then again at 18 with your college teammates. Finally, you reach the NBA, and your mom, your dad, your high school teammates, college teammates all cheer you on.

You’re still hooked, you want for now not only your professional teammates to cheer on, but the rest of the people in the stadium, and everyone else watching outside. And every year, one team doesn’t miss. All the experiences that you’ve felt since you were 11, your mom, your dad, your high school and college friends/teammates, flood you in a single moment when you’re handed that trophy.

This is why we watch the playoffs every year. Most of us have missed in some form. But we root for the guy or the team that doesn’t. 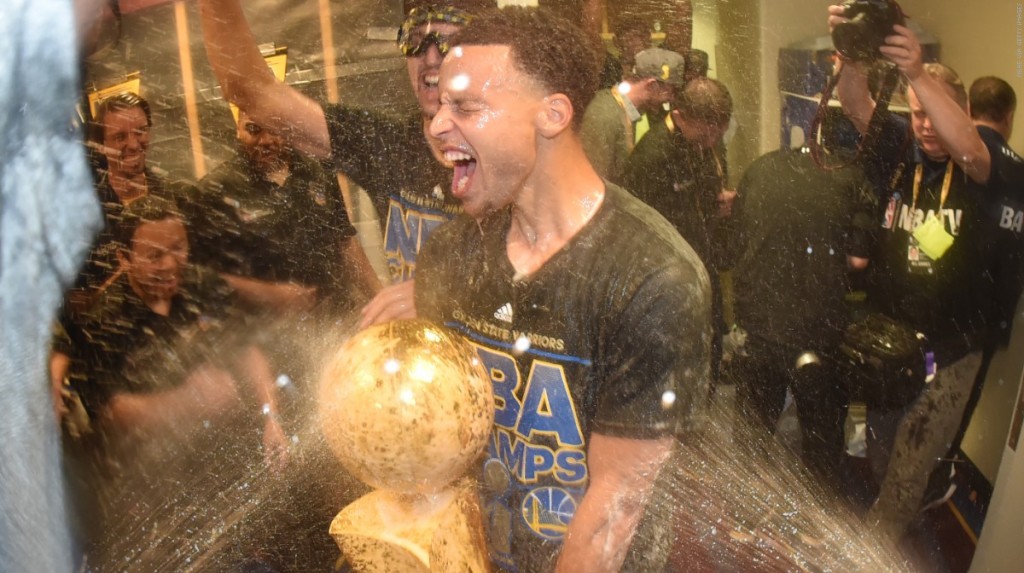