“Please, please, please,” Cabal tweeted, as her favorite team was pushed to the brink of elimination at the recent PBA Commissioner’s Cup. “Laban, Barangay Ginebra!”

Cabal is a social media producer for a news organization and was working the late shift when Ginebra was ousted by eventual champions Rain or Shine.

But her day job isn’t the reason why she has more followers than Mark Caguioa or LA Tenorio or Greg Slaughter. She is the woman behind the @barangayginebra fan account on Twitter. 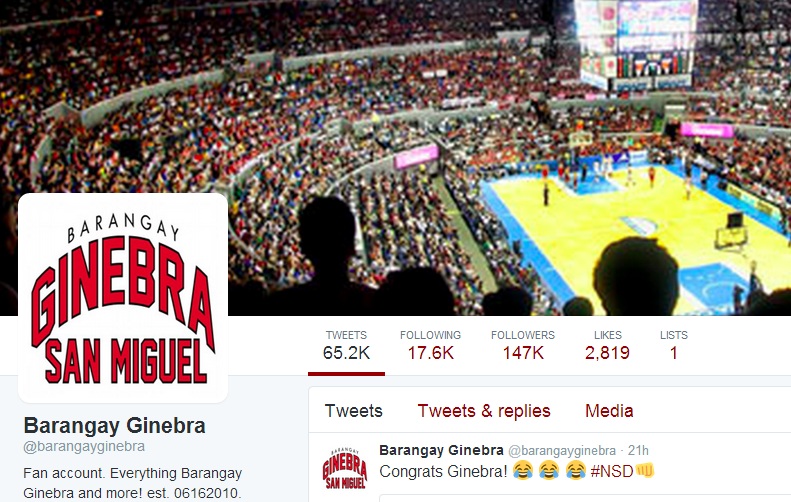 This is how Cabal, 24, has been supporting her team for the past six years, dishing out play-by-plays and words of encouragement for her fellow Ginebra faithful on Twitter.

During Ginebra games, Cabal’s home in Laguna doesn’t buzz like the Smart-Araneta coliseum, but her cheers have always been the loudest.

Ginebra is the most popular team in the PBA, the basketball counterpart to Tito, Vic, and Joey. In their films in the 80s, TVJ are often underdogs–caricatures of the struggling everyman. Ginebra, blessed with similar 80s nostalgia, fit in to that same role in the pros.

Those come-from-behind runs, unexpected victories, and storybook endings keep you glued to Working Boys, Shoot That Ball, and Manila Clasico.

“Maybe it’s for that one reason that the team plays with sheer heart and unbelievable guts and that same reason will make you realize, even if seeing them play for the first time, that this team is definitely above the rest,” Cabal says. “This Ginebra magic, I never found this in any other team. Barangay Ginebra is home for me.”

Teams these days–or any organization for that matter–use Twitter as a marketing tool. Hashtags have become too planned, and trending topics are too often nonsense.

When Cabal created the @barangayginebra account as an 18-year-old fan in 2010, all she wanted was to connect to other people with similar interests, as any 18-year-old with a laptop would do.

Cabal saw the community grow to a hundred thousand, making it the biggest PBA fan account on Twitter.

Ginebra’s Manila Clasico rival, Purefoods, has its own growing fan base–the Apo Hiking Society to Ginebra’s Tito, Vic and Joey. But on Twitter, Purefoods’ followers (a combined 62,000 from two accounts) are not even half of @barangayginebra’s.

Cabal is aware of her responsibility of harnessing the power of Ginebra fandom, which can sometimes be reckless when rubbed the wrong way. 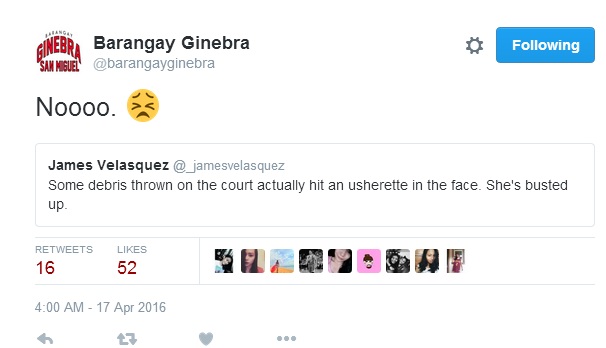 And the losses have been piling up for Barangay Ginebra. The last time the franchise won a title in the PBA was in 2008, when the team had players like Vic Pablo, Junthy Valenzuela, and Rodney Santos in the lineup.

Champion coach Tim Cone is now manning the sidelines for Ginebra in hopes of bringing the title back to the barangay. Despite the title drought and the many heartbreaks, Cabal and the thousands of believers haven’t lost faith.