When he is not doing animation for Family Guy, LA-based artist Jack Perkins is reimagining iconic NBA moments by turning them into something even more awesome: the image of Tim Duncan hugging the last pineapple at a supermarket.

Using his flawless footwork, Duncan spun away from his defender and grabbed the last remaining pineapple from the grocery shelf. The last line of defense, a white-haired grandma on a scooter, helplessly tugged at his jersey. Duncan, in his customary pre-tip-off hugging a basketball pose, wouldn’t let the fruit go.

A grocery staff, who looked suspiciously like Joey Crawford, snarled in the background. 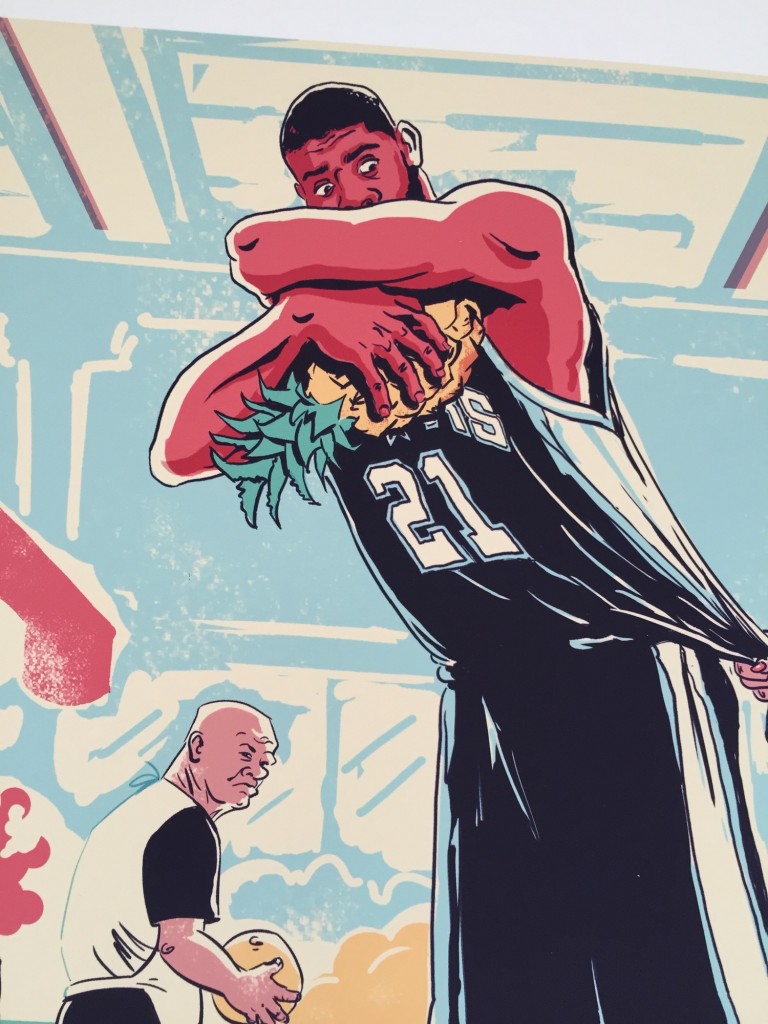 These things didn’t happen. But for over a month, Perkins of purehoop worked on finding the right composition and color scheme to make “Everyday Tim” happen through his art series Everyday Ballers.

“The idea behind the Everyday Ballers series was to take iconic images or moments from legendary players and place them in more mundane, relatable, everyday environments,” he tells BuhayBasket. 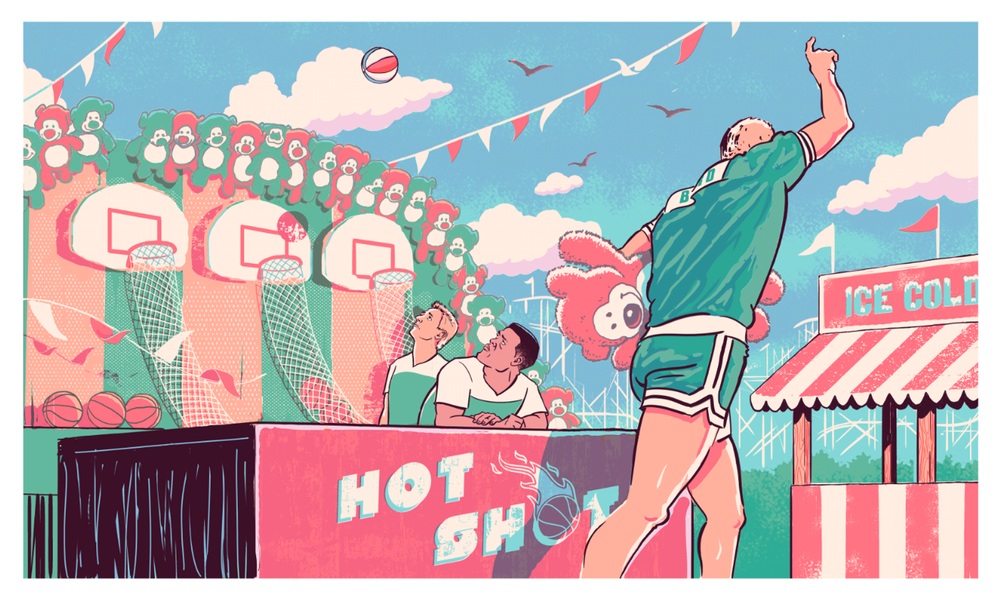 Larry Bird confidently walking away with his prize before the money ball went it; Magic Johnson showboating at a local Benihana. All of these happened in the mind of Perkins, and he was kind enough to share it to the world. 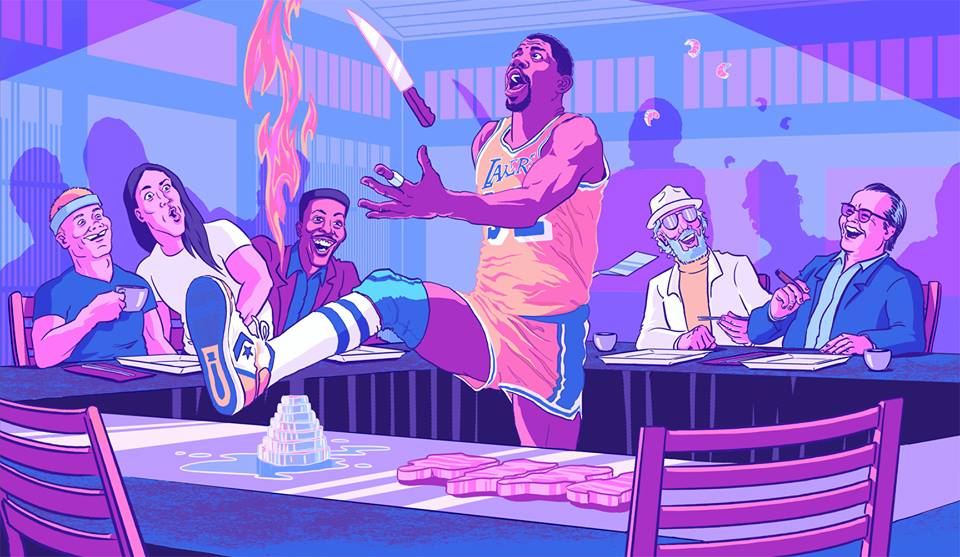 “Inspiration can come from watching a specific play or hearing a notable quote. It can also come from thinking about something or seeing something completely outside the basketball world and trying to tie the two together in an interesting way,” he says.

Perkins created his first basketball-themed art when he was only 7 years old, blending together two of his favorite things.

In 2008, he painted his favorite piece: a portrait of Laker legend Lamar Odom. 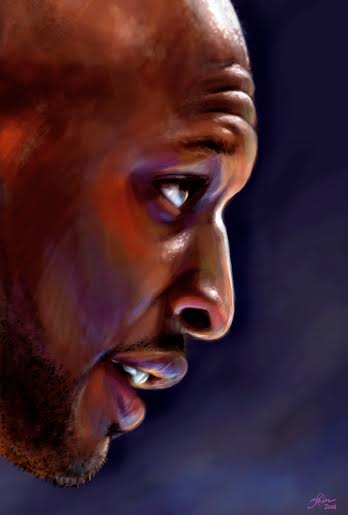 Perkins’ first foray into digital artwork was an image of another Laker, Kobe Bryant–mid-flight and about to throw one down. But painting on canvas is something he wants to come back to someday–if he finds the time between being a retake director for Family Guy; being a dad to 3-year-old daughter Irie; and a husband to wife Alicia.

A couple times a week, he says he still gets to play his favorite sport “for a physical and competitive outlet.”

“One of the leagues I play in here in LA is mostly Filipino so I truly understand the unbridled love that the Philippines has for basketball,” he says.

Perkins’ team recently won the championship. That’s him, flanked by his Filipino teammates, wearing the number 6. 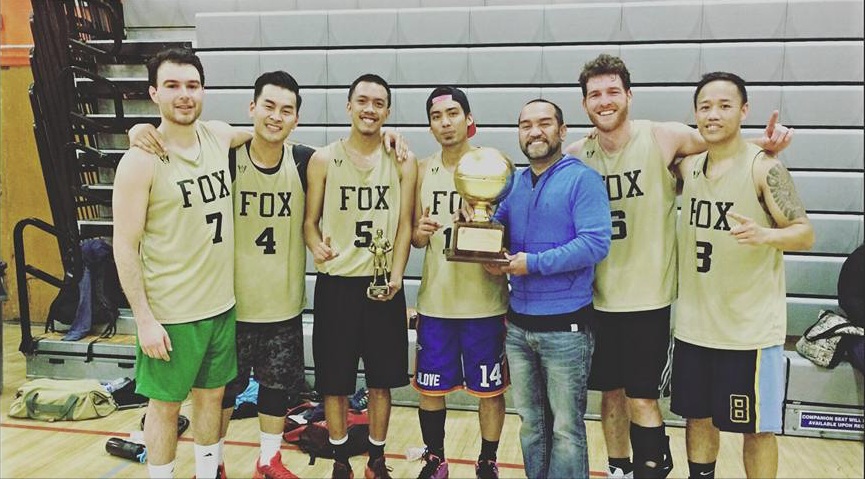