September 7, 2016
This DLSU team had one of the best shooters in Philippine basketball, a heroic point god, a two-time UAAP MVP, and BJ Manalo.

“The Shot” Feat. Dino Aldeguer wasn’t even the game-winner, but it went down as one of the biggest shots in the history of college hoops. It may have a lot to do with the backstory.

The 1999 season was not only the year the Green Archers won back-to-back, it also put an end to the UST curse. Like The Dark Knight, La Salle’s second stab at destiny was infinitely better than the one that came before it. But the road to the second championship wasn’t as easy as the first. It was EDSA on a rainy, payday Friday. Fortunately for the team, the one behind the wheel was still Franz Pumaren.

The defending champs started the season sluggishly, escaping with wins in the first two games before taking an L against UST in their third game of the season. The team’s meh performance forced coach Franz to make some changes, one of which was benching Aldeguer, a Mythical Five member.

By the second round, La Salle regained championship form and was a win away from taking the Number 1 spot in the regular season. The team in the way was UST. The story goes that on that crucial game, Aldeguer and Don Allado were stuck in heavy traffic and failed to make it to the Ateneo gym. Good thing Renren Ritualo was there to carry DLSU to a much-needed victory.

The we-got-stuck-in-traffic incident reportedly didn’t sit well with Pumaren, obviously, and was seen as a sign of protest from the team’s two biggest stars against their coach. Aldeguer and Allado had denied this.

So at the last game of the finals against the same UST team, series tied 1-1, 18 seconds left, La Salle down 3, it was fitting that the ball was in the hands of Aldeguer, then to Ritualo (best shooter), then to Allado (two-time MVP), and then back to Aldeguer.

Big basketball moments caught on camera are special, mostly because of the end result–whether clinching a title or sending a game into overtime–but also because of things (mostly offcam) that happened before the big moment. Aldeguer’s game-tying basket was special because of many things: it was inspiring and unexpected. It was awesome and electrifying. Judging from his reaction after making it–running to the opposite end of the floor, arms up high, head bowed down–it was also redemption. 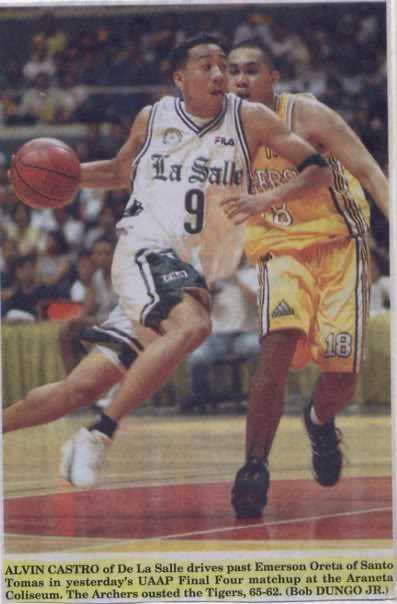