December 21, 2016
The only negative thing said about them is that they were “boring.” Yes, perfection is a flaw.

In a season of asterisks, the championship run of the 1998-1999 San Antonio Spurs was perfect. It wasn’t perfect in the Bulls’ title run kind of way, which ended in an exclamation point disguised as The Shot. The Spurs’ title run to end the 90s was more of an ellipsis; a leading statement to usher in a new era of NBA basketball.

The 1998-1999 season was a shortened season. No thanks to salary disputes, the season was cut to only 50 games and didn’t start until February. It was also Year Zero: the first year in the post-Jordan era. Of course, Michael Jordan returned a few years later, but no one knew that at the time (except, perhaps, Michael Jordan). 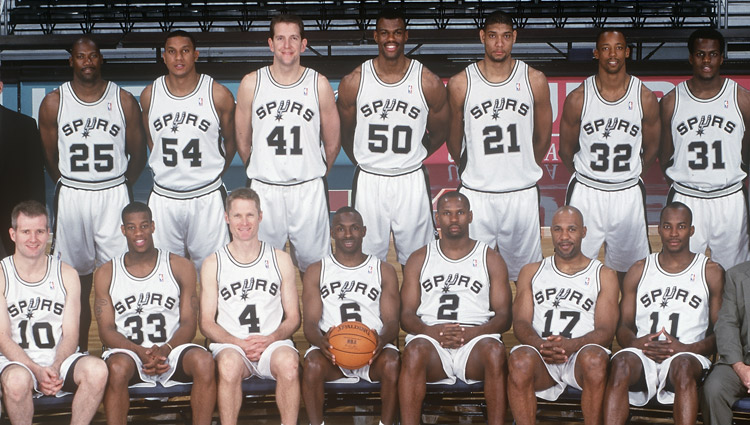 The Spurs, led by veteran David Robinson and sophomore Tim Duncan, were in a sweet spot, as all eyes were on the heavily-favored Utah Jazz after back-to-back losses in the finals. It was their time. Shaking off flashbacks of MJ’s Game 6 follow through pose, MVP Karl Malone led Utah to win 37 games, good enough for third place in the Western Conference. But San Antonio, like a thief in the night, also won 37 games as well as the season series vs Utah to get the top seed.

When the playoffs began, the Spurs as a well-oiled machine made its debut, eliminating the Wolves (3-1), Lakers (4-0), and Blazers (4-0) in a methodical and convincing manner that can only be described as both boring and perfect.

In the finals, the Spurs faced the New York Knicks–an exciting and high-octane version of the Knicks. With Patrick Ewing limping, Larry Johnson hungry, and Latrell Sprewell unleashed, the Knicks went completely rogue. They entered the playoffs as the eighth seed, but after an Allan Houston game-winning floater here and a Spree highlight there, the Knicks found themselves four wins away from an unscripted title.

The Spurs, however, were just too good. While Spree had the intensity of Season 1 Jesse Pinkman, Duncan meticulously dissected his way in the paint and turned Heisenberg on the Knicks’ Cinderella story. It was the first taste of the championship for Robinson, Duncan, and Spurs coach Gregg Popovich. No one knew then that Duncan would win at least one title in three different decades, because no one made promises and guarantees, because that first championship had many asterisks that came with it–one of which was that it was the introduction to 19 years of greatness.