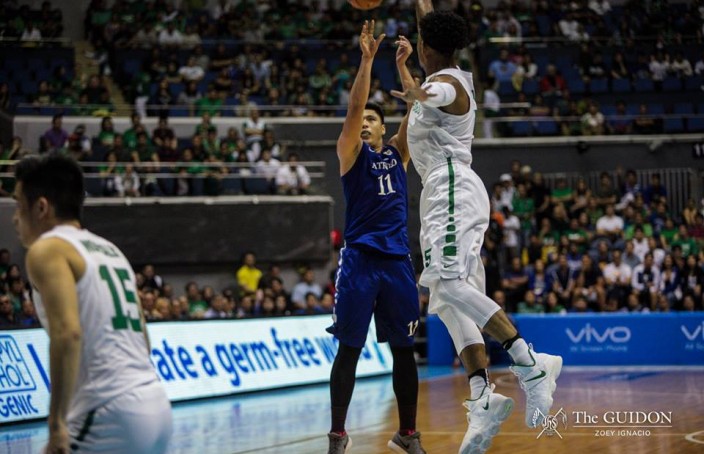 In an alternate reality, the FEU Tamaraws and the De La Salle Green Archers battled it out in a physical, dirty finals series, turning the La Salle-Ateneo rivalry into a distant memory. This other version of life would’ve been real, if Isaac Go didn’t exist.

Arespacochaga wasn’t angry at Go; he was ecstatic and proud. Go had just hit one of the biggest shots of his career to finally become a UAAP champion, just as his assistant coach had envisioned for him.

A year before, it was a different post-finals scene for Go and the Ateneo Blue Eagles. Swept by a stronger and more experienced De La Salle squad, the Blue Eagles were on the losing side of destiny. The confetti that fell from the rafters were not for them, but for the guys in green. Flood alerts were reported in Katipunan, not Taft.

Arespacochaga promised Go that this year would be different, if only the gentle giant would have confidence in his shot. Arespacochaga, as well as Ateneo head coach Tab Baldwin, had put so much trust on Go, buttering him up for the right moment—or moments—when his shooting and high basketball IQ would be put into good use.

One such moment came at the final game of the elimination round. With a 13-0 win-loss record at stake—against rivals La Salle, no less—Go’s number was called to take the game-winner with 12 seconds left in the game.

The final play, drawn up perfectly by Baldwin (did you expect anything less?), involved Go taking a familiar semi-hook shot near the basket. The shot was there, but the ball didn’t go in.

The consequence of the miss was huge: Ateneo wasn’t able to sweep eliminations (which would’ve given them an outright finals berth) and, perhaps more importantly, Ateneo wasn’t able to sweep La Salle. The loss meant Ateneo would have to go through a gritty FEU team before getting to the finals. It also meant Go would have a chance to redeem himself.

So at the most opportune time, with Ateneo’s season on the line, Go drilled a game-tying 3 to force overtime against FEU. And the way he popped out after setting a pick, pumped fake, and followed through on the big shot, he looked like the GOAT in Game 6 of the NBA Finals.

In overtime, Go hit another big shot, extending Ateneo’s lead to 5 with a prayer (probably to himself), hoisting a shot on one knee before falling on his back.

From missing on the first chance to send Ateneo straight to the finals, Go evolved to putting the entire blue and white community on his broad shoulders, and taking them all the way to the biggest stage in college hoops. From “Fat Isaac” to Isaac GOAT.

So when Ateneo needed one more prayer answered in Game 3 of the UAAP Season 80 men’s basketball finals, as their big lead started to evaporate before their eyes, they, again, turned to Go, the patron saint of clutch, Katipunan’s version of Robert Horry, to save the day.

Go, a mild-mannered big guy taking up applied chemistry, is not Ateneo’s go-to scorer. That title belongs to Finals MVP Thirdy Ravena. Yet on the biggest play of the finals, with La Salle just one Ben Mbala field goal away from snatching everything that Ateneo worked hard for the whole game, the ball ended up on Go’s steady hands. The rest is Go’s story.

After the final buzzer, Arespacochaga and Go shared a hug at center court, confetti finally raining down for them. Mbala, the two-time MVP, is in tears. The Ateneo crowd is chanting Go’s name. This is the reality we live in. All because Isaac Go exists.