Because there was no Cavs drama, the best thing that happened today was the hideous thing that Zach LaVine did to one JaKarr Sampson.

– Dirk Nowitzki became the sixth player in NBA history to play 50,000 minutes (the name on his jersey was misspelled “Nowitkzi” to celebrate this momentous day).

In case you missed it, here’s a play-by-play of the incident that happened towards the end of the first half, with the Chicago Bulls up 12 over the Sacramento Kings.

LaVine had the ball on the left side of the court and was loosely watched by Garrett Temple. The left baseline was open. LaVine knew it, Temple knew it, and Zach Randolph, who flirted with a double team, knew it. JaKarr Sampson, a 6-foot-9 forward, knew it too, unfortunately, and he scrambled to clog LaVine’s air space.

While Randolph, a 16-year vet, made a good business decision by getting as far away from the play as possible, Sampson did the complete opposite by leaping in front of a bullet.

(Side note: Randolph might have had flashbacks of the time when his then-tormentor, now-teammate Willie Cauley-Stein dumped one on him when he was still a Grizzly. He has clearly learned his lesson.)

The eight other players on the court were reduced to mere witnesses to the crime that was about to happen. Someone from the bench stood up prematurely, as if he already knew what was about to go down half a second before it actually went down.

LaVine and Sampson collided in midair, the impact so strong it sent Sampson’s jersey to become undone. A bit of skin on Sampson’s lower torso got exposed, which—we have to check this—could’ve been the first time in NBA history that a dunk caused a wardrobe malfunction.

LaVine dunked it on Sampson and got fouled in the process. He stuffed the ball into the rim so hard, it sounded similar to the sound the TV makes when it abruptly goes static—that’s how life must have felt like for Sampson. He was cancelled.

LaVine said some things after the dunk, and Sampson pushed him away, almost instinctively, like the way our body twitches when in shock.

Stacey King, the Bulls’ commentator had to rub it in: “Did you not get the memo?! He didn’t come for the massage, he came for THE FACIAL!”

The memo that Sampson did not get looked like this: 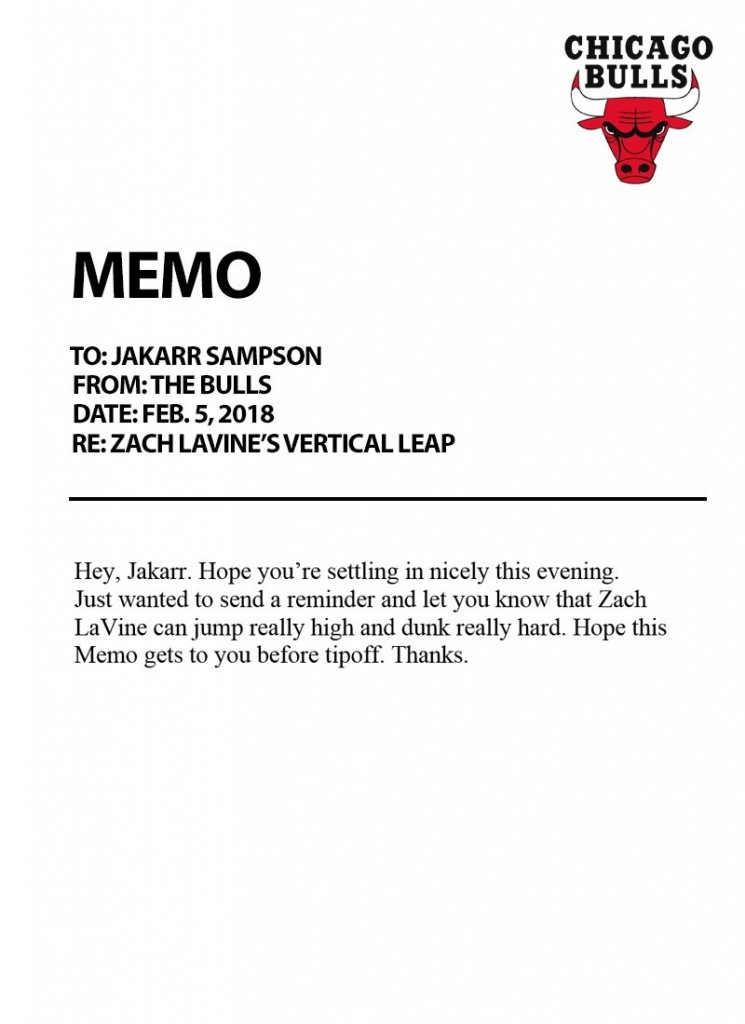 This memo should be sent to all, with organizers of the 2018 Verizon Slam Dunk Competition CC’d. LaVine, barring (God forbid) another injury, and Sampson should be in next year’s dunk contest.