Slow Tuesday: What If the ‘04 Wolves Beat the Lakers?

In 2004, the Minnesota Timberwolves lost to the LA Lakers in the Western Conference Finals. But what if they made it all the way to the championship?

In 2004, three things happened that forever changed the course of history.

In order of importance: First, Mark Zuckerberg launched Facebook. We all made that jump in 2004 from Friendster testimonials to Facebook Likes. We use Facebook now mainly to read fake news and share cat videos.

Second, the Legend of Ron Burgundy was told in the documentary “The Anchorman,” and TV news casting has never been the same ever since.

Third, Kevin Garnett became the league MVP and led the Minnesota Timberwolves to the 2004 NBA Western Conference Finals, where they lost to the Los Angeles Lakers in six games.

I know, you’re wondering: What if Facebook never took off?

What if Ron Burgundy and Veronica Corningstone never reconciled?

What if the Wolves won over the Lakers and then chomped down the Detroit Pistons in the Finals?

It’s been 14 years since the Wolves made it to the NBA Playoffs, and Karl-Anthony Towns, Andrew Wiggins, and Jimmy Butler have a chance this year to finally end the drought. But instead of predicting how that will end (probably badly), let’s look at an alternate reality of what could have happened with some of the 2003-2004 Minnesota Timberwolves players if they had won the title.

Wins his first out of 3 NBA championships with the Wolves in 2004-b. Minnesota’s front office does not trade him in 2007 to the Boston Celtics, and the Wolves never draft Jonny Flynn.

Instead, KG influences their GM, David Kahn, to draft this tiny-framed “tweener” named Stephen Curry. They go on to win two more rings.

Without KG, Boston never has a Big 3, and not-NBA Champion Paul Pierce retires as a Celtic in 2020.

Ray Allen stays with the Seattle Supersonics and plays with the 2nd pick Kevin Durant until retirement (Of course, KD eventually joins KG and Curry to form a ridiculous team in Minnesota).

Rajon Rondo moves from the Celtics to the Mavericks, then to the Kings, then moves to the Bulls, and eventually ends up with the New Orleans Pelicans in 2017. 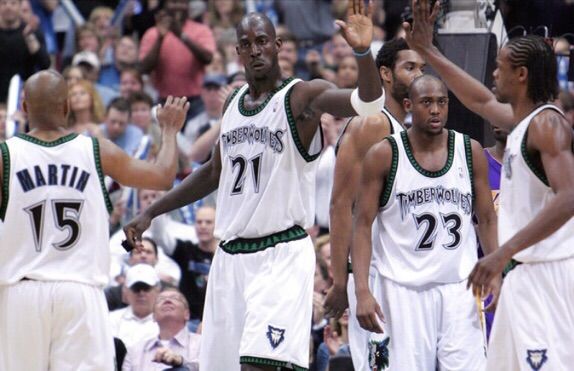 “The Kandi Man” wins the only championship of his career and gets traded to the Celtics in 2006. He retires in 2007 and eventually gets the lead role in the 2017 award-winning Netflix documentary, Kwame Brown: The Rise from a Draft Bust to a, Well, Mediocre, Serviceable Player.

After winning the title in 2004-b, “Spree” didn’t need to negotiate for a contract extension with the Wolves and has enough money to feed his family in 2005. (Side note: This is still the funniest thing I’ve heard about a player negotiating his contract—stating that he needs better pay to feed his family. He was at $8.3 million a year that time. Imagine how many Big Mac meals you can buy with that. Upsized.) Sprewell eventually gets traded in 2007 because he “tried to commemorate the 10th year anniversary of the PJ Carlesimo friendship hug” to then coach Randy Wittman.

Cassell never injures his back during the 2004-b Western Conference Series against the Lakers and plays 82 games the following season after winning his third NBA title at the 2004-b NBA Finals.

He gets offered a contract extension by the Wolves and retires in 2009 to become an assistant coach of the Wolves and mentors their second-year point guard, Steph Curry.

The most unfortunate thing this alternate reality could never have with Cassell is this photo of him in 2009 when he played for the Boston Celtics. 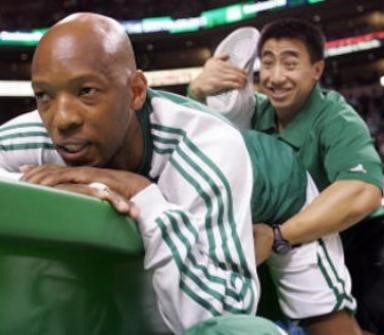 After winning the title in 2004-b, “The Mayor” retires from basketball and moves back to Iowa to run for office and becomes an actual mayor. As a legit elected politician, Hoiberg comes back to the NBA in 2015 to become its first coach-politician—after being inspired by coach-politician legends like Franz Pumaren, Yeng Guiao, and the People’s Champ, Manny Pacquiao.

After winning the title with the Wolves, KG raps while Mark Madsen performs this same exact dance during the championship parade: