If we can do a Finals preview even before the season started, this would be it.  The Dubs are the reigning champs; the Celtics finally have everyone healthy.


When the Warriors were down at halftime in Game 7 of their Western Conference Finals against the Houston Rockets, everyone thought, “Well hey, they’re a beatable team!”

At times, the Warriors looked bored during the season and just wanted the Playoffs to start and claim the Larry O’Brien trophy already.  James Harden and co. seemed to have found a chink in the armor of the Warriors, as it seemed they didn’t really have much depth once you take out the Hamptons Five.

After that close Game 7 that probably a lot of their haters would say that the Rockets would have won if not for Chris Paul’s untimely injury, you would assume the Warriors would recruit role players after losing David West to retirement and JaVale McGee to La-La Land.  They did just that, and was able to sign energetic and versatile forward Jonas Jerebko. At that point, people started screaming “unfair” to the NBA as it seems they are attracting more talent because of their style of play and overall market appeal.

Probably Warriors GM Bob Myers felt like having four All-Stars (potentially all as Hall-of-Famers too) is enough, as the Warriors kept quiet for a few weeks after the Jerebko sining.

Then on one random Monday, DeMarcus Cousins announced that he’s signing a $5.3 million deal to join Golden State. Say what? Exsqueeze me?

That’s the time the internet went nuts. The rest of the NBA went nuts. We thought it was a joke and then we went nuts. Would NBA 2K allow this to happen in a simulated season? Nope. That’s just nuts.

Just for context, Alex Abrines from OKC made more last season than Boogie will make this upcoming one. If you said “Alex who?” then you get the point.

So since we need to pick a player from the Warriors’ past in this Fantaserye, we could probably choose anyone from the past and they would still probably end up winning the title this season. From the Warriors’ history waiver-wire, we’re reviving one of the worst players in Dubs history: Adonal Foyle (who by the way got paid way more than DeMarcus even in the 90s)

With Steph, Klay, KD, Draymond, and DMC doing what they’re supposed to do, and still having Iggy and Shaun lead the 2nd unit of young, reliable back-ups in Jerebko, Quin Cook, Jordan Bell, Damian Jones, and newcomer Jacob Evans, there’s really no need for Chris Mullin, Baron Davis or Chris Webber to suit up.

If the Warriors built a superteam in the West, the same can be said about the Celtics – relative of course to the competitiveness of the Eastern Conference.

They might not feature a full starting five of All-Stars, but the Celtics were able to somehow rebuild in fast-forward after winning the title in 2008 and retaining a Hall of Fame core of KG-Pierce-Allen up until the 2012 season.  Other teams would take a decade to rebuild (see: New York Knicks,) but not this team. With Danny Ainge as GM (how good could this guy be in NBA Fantasy??) and the genius of Brad Stevens on the bench, the Celtics remained competitive and seemed to have completed a rebuild in less than a season. Playing around with draft picks acquired over awful trades, Boston was able to build a young team that has played to a system that amplifies their strengths.

Kyrie Irving will be returning for his 2nd season with the Celts, with the last one being cut short by an unexpected injury (again); Gordon Hayward has fully-recovered from his gruesome injury from the season opener last year (don’t ever re-watch it); the all-around big man Al Horford returns for his 3rd year in Boston. Because of Kyrie and Hayward’s absence last season, the young core of Jayson Tatum, Jaylen Brown, and Terry Rozier was on a rapid development program. 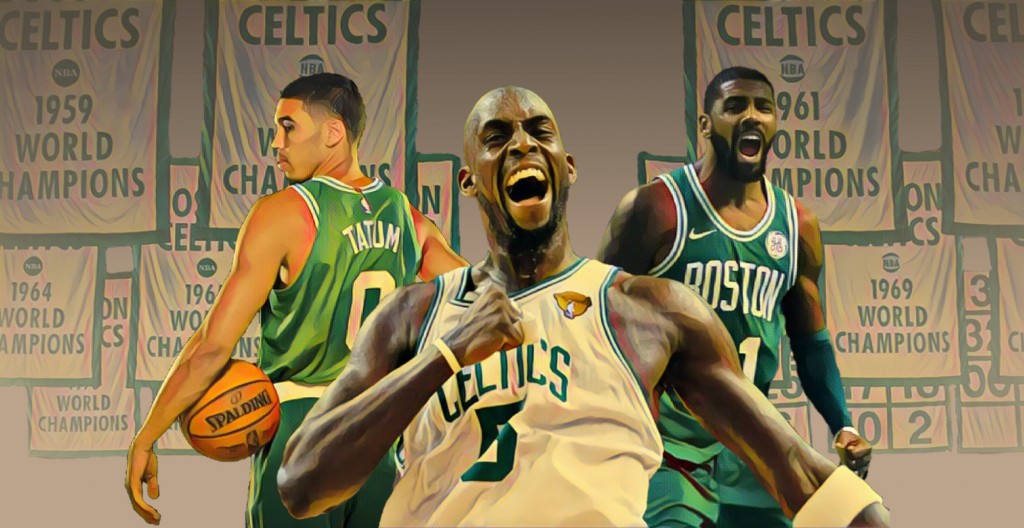 KG will be filling up the PF hole of the Celtics, and can even slide down to center should they decide to run with the Warriors’ small-ball line-up. He can take it to the post, kick it out to shooters, and defend the paint. He’s everything any team would want – and you got to factor in how he can get into his opponents’ heads. It’s only logical to put a mic (or a GoPro) on both KG and Draymond – this in itself is a series to watch.

It’s all going to be entertaining. KG would probably elicit a brawl with DeMarcus and Draymond, but let’s face it, the Warriors will win this series against Boston for as long as Steph, Klay, and KD are healthy.

Even with good ol’ Adonal Foyle starting at C.