What happens when you add a hall-of-famer to the current line-ups of NBA teams today? That’s what we’ve been doing the past few days as we count down to the NBA’s opening night. We’re down to six days until we get our new dose of NBA season games (because pre-season games don’t count) and tonight we will feature the 6th seeds from last season: Unibrow’s Pelicans and the Miami Heat.

The Pelicans had good playoff run last season, even when they lost Boogie Cousins to an achilles injury during the season, they actually might have performed better without him the rest of the way. I guess we’ll never know since Boogie is now chillin’ like a villain in Oakland with the reigning champs.

NOLA’s emergence as a contender in the competitive, wild, wild Western conference was due to the development of their former no. 1 pick, Anthony Davis. The Unibrow finally steered clear of injuries last season; he established himself to be a dominant offensive player who ran the court like a guard and ruled the paint both ways. It was an MVP season for the Brow and it seems like he will have another shot at it this season.

Apart from losing DMC, they also lost the services of point guard savant Rajon Rondo as he signed a 1-year deal with LeBron’s Lakers.  The Pelicans have instead brought in a Rondo prototype, Elfrid Payton – a taller version but would not have Rondo’s basketball IQ, and has arguably a far worst hairstyle as well.

One of the biggest surprises last season was the unexpected rise of Nikola Mirotic, and his recovery from a right haymaker from Bobby Portis, returns this season. Jrue Holiday will continue to be the scoring guard for the Pels, as he is expected to build on a strong campaign last season. To replace the big hole that DeMarcus left, New Orleans signed the raw talent, high-upside Julius Randle.

It would be a difficult path for the Pelicans as they are again in the West – apart from the usual suspects from last year – Golden State, Houston, Utah, Denver, etc., – they also need to worry about LeBron and the Meme Team now that the Lakers have set themselves up as a contender. Good thing that in this Fantaserye, we’re allowed to add a former player to improve the team somehow – and since the Pelicans is fairly young, we will be tapping the services of former Charlotte Hornets ROY Larry Johnson.

He might be an undersized forward, but don’t let Granmama’s height fool you, he might just be the 90s version of Draymond Green – can run the floor, crash the boards and shoot threes.

The Miami Heat on the other hand was supposed to trend downwards after LeBron left them in 2015, but for some crazy reason the Heat has been competitive the past couple of years and has maintained a Keanu Reeves-like team when he was part of the movie The Replacements. The Heat ended up with a team of rag-tag role players and quasi-stars, and somehow made it work and ended up as the 6th seed in the semi-competitive Eastern Conference.

The Dragon (still one of the coolest nicknames in the NBA), Goran Dragic controls the pace while Dion Waiters and James Johnson wreaks havoc figuratively and literally on the court.  They retained the same line-up from last season but was able to re-sign future hall-of-famer Dwyane Wade to another year for one last run.

Another key-factor is the recovery of Hassan Whiteside from injury (or random benching), and it seems like he’s back as he has been collecting Fantasy-worthy double-doubles the past few pre-season games with tons of blocks and high FG% (shout out to Fantasy Guru Elvis Gutierrez). However, there is a high possibility that the Heat is shopping him for a trade as Spoelstra doesn’t see him as a good fit to his system. So let’s say he gets traded before the deadline.

Without Whiteside, who should start then at Center for the Heat? Well, good thing this Fantaserye allows a hugot from the 90s, and we’re tapping the services of 90s Alonzo Mourning to bring legit big man presence in the paint. 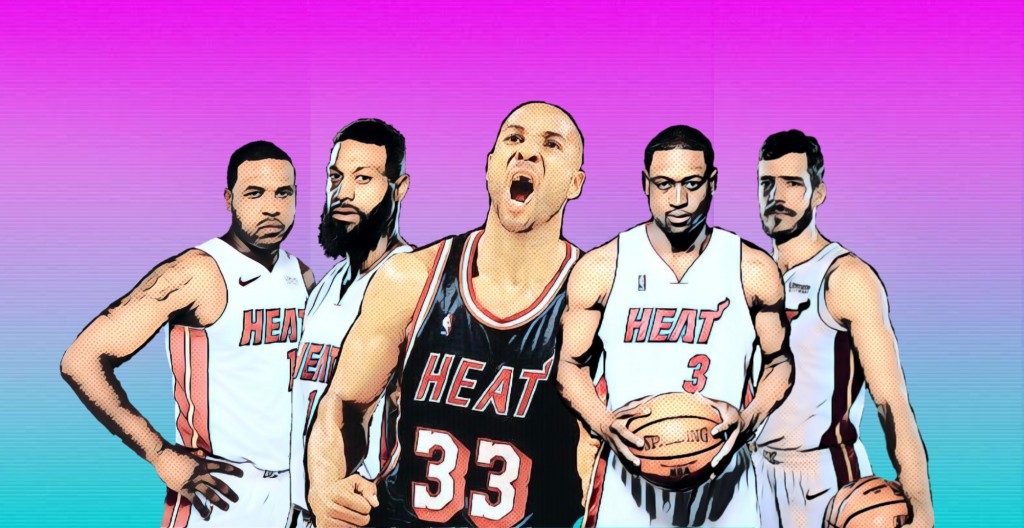 Interesting match-up between Zo and LJ, as they revive their rivalry from the 90’s (hope to see Jeff Van Gundy jumping out of the commentators’ table and ends up hugging Mourning’s leg) while a battle between the Johnsons (LJ vs. JJ) is a must-watch – LJ is a trained boxer, while James Johnson is a black belt mixed martial artist.

Fist fighting aside, the Pelicans has this. Even without LJ, Ant Davis and the current roster of the Pelicans is just more complete than the Heat’s guard-heavy line-up. Sure, Alonzo Mourning will bring the inside toughness and a legit low-post threat, but the modern day system of the Pelicans will ruin Dwyane Wade’s farewell tour.