It is a miracle that two-time NBA champion Lamar Odom survived that ordeal.

The versatile forward of the Kobe Bryant-led Los Angeles Lakers is in the country and will be representing the flag while playing for the Mighty Sports Philippines basketball team in the upcoming Dubai International Basketball Tournament.

For this tournament, he will be surrounded by some young upstarts from the collegiate level, and he had this to say about it: “For me, it’s reviving, anytime you surround yourself around youth, it helps you feel young, so I am glad we have a couple of young players on our team.” 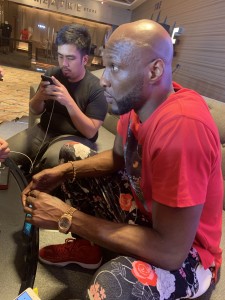 The former NBA Sixth Man awardee divulged that he sees himself playing basketball here in the Philippines during the press conference, which was held at The Theater Café of Solaire Resort and Casino.

“This is my first time here in the Philippines, and the Filipino people are very welcoming. If it goes good here, I can see myself maybe playing basketball here,” he said.

Odom’s agent, Sheryl Reyes, said Odom is also preparing himself to participate in Ice Cube’s Big 3 Tournament in the US, but did not discount the fact that there is a possibility for the 6-foot-10 forward to play in the PBA or even suit up for Alab Pilipinas. 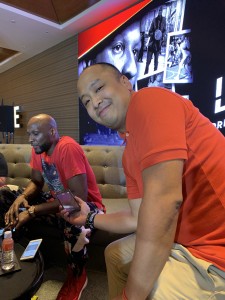 When he was asked to differentiate the experience between the young Clippers team and that of the Lakers, he had this to say: “It was fragile. Because the tradition, it wasn’t like it is now (even), the tradition was you were expected to lose; it was hard to go out there and play with pride, and faith that you can win. You’re expected to lose when fans, referees and the league expected you to lose, so it was totally different.”

He also shared that it was a dream come true to be on the same team with Metta World Peace (formerly known as Ron Artest) when he joined the Lakers in 2009.

“Me and Ron are like brothers, I’ve known him since I was 12 years old, we played AU Basketball together in New York. I remember talking to him and telling him how great it would be if he could come to the Lakers and we could win a championship,” said Odom, proudly adding that he played a role in recruiting Artest to the Lakers.

Odom is truly an inspiration for anyone going through tough times. He has battled time and again the challenges life throws at him. He lost his mother to cancer at the age of 12, lost a child during his NBA career, and almost lost his own life to drug overdose in 2015. Here he is, getting another chance to do what loves best and that is playing basketball. He also shared with us the biggest lesson he learned in the last five years was to be very picky when choosing friends and to love your family.

Catch Odom, Juan Gomez De Liano and the rest of the Might Sports team as they compete in the 30th Dubai International Basketball Championship from February 1-9, 2019.