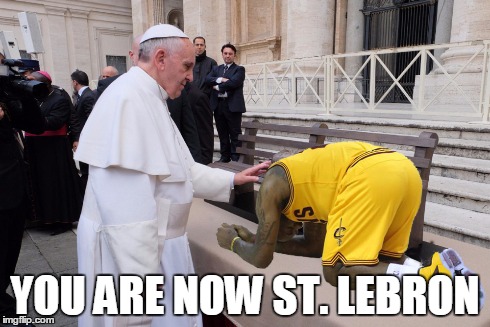 Paolo Mariano works as a head writer and producer for the news department of a TV company. He also contributes for various magazines and websites, mostly about sports—okay, mostly about basketball. He graduated with a degree in Journalism at UST in the year 2000-something. He wore knee-high socks with his khaki shorts during elementary because he venerated Samboy Lim. If only he had grown a 70s pornstache back then as well.

All posts from Paolo Mariano
0

Tagged with Atlanta Hawks, Cleveland Cavaliers, LeBron James, NBA, NBA Playoffs
Spread the love
Just in case you’re living under a rock under the Pacific Ocean or still reeling from the finale of Forevermore, LeBron James went bat-shit crazy in Game 3 of the Eastern Conference Finals against the Atlanta Hawks. He finished with an NBA2K-ish 37-18-13 in 47 pulsating minutes. His 12th career playoff triple-double (it easily could’ve been his 13th—he was only a rebound shy in Game 2).