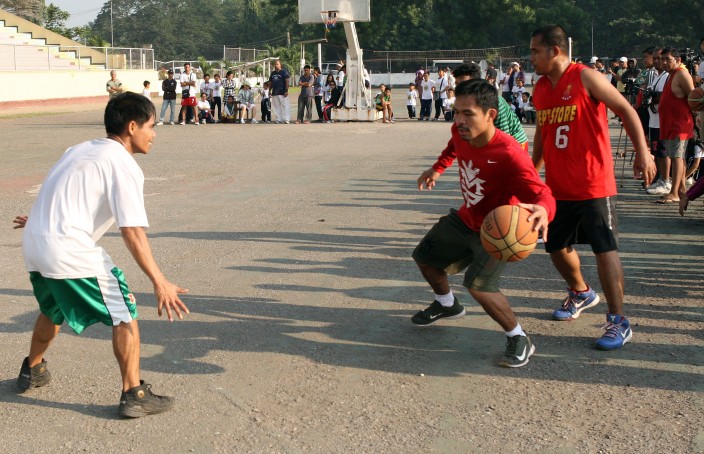 At guard, standing 5-foot-7, from General Santos City, the Fighting Pride of the Philippines, Manny Pacquiao!

Just close your eyes and imagine that for a second. Even in the inner recesses of your indiscriminating imagination, it sounds and looks ludicrous: Manny Pacquiao playing in the PBA—and coaching too!

You’ve heard it. There’s a possibility that Pacman might trade his boxing boots for Hyperdunks as he’s reportedly reached an agreement with expansion team Kia Motors to become its playing coach. It’s not unprecedented in the PBA as Robert Jaworski has done from 1985 to 1998 and Norman Black from 1985 to 1986. But a world renowned boxer turned hooping tactician? C’mon!

Some observers, however, believe that it’s just a publicity stunt for Kia, who will join the league next season along with NLEX and Blackwater. Why not? There’s no better way to announce your arrival in Philippine basketball than to let the most revered boxer of this generation run your team.

But just as any other publicity stunt, like LeBron’s “The Decision,” Dennis Rodman’s marriage with himself, and Janet Jackson’s Nipplegate at the 2004 Superbowl, there are pros and cons that come along with such audacious actions. In Pacman’s situation, it’s pretty clear that the cons outweigh the pros. Just like seeing Big Baby Davis and JJ Barea on a seesaw.

Pacquiao, a guy whose every move is newsworthy in the Philippines, playing and coaching in the PBA will definitely garner massive media mileage and instant fandom. The eight-division world champ has been a fan of the league since the days of short shorts and Kaypees, and if he has the chance to realize his dream to suit up, he’ll take it. Well, it seems Kia has already capitalized on that opportunity. Sure, it’ll be curiosity rather than actual support, but still, thousands are guaranteed to flock Kia’s games just to see how Pacquiao will do against the best Filipino cagers. You know the formula: more fans = more revenue.

If ever the People’s Champ officially gets the job, the one thing that he could really pass onto his players is his legendary work ethic. Inspiring his players to prepare as hard as he does when he’s gearing up for a fight could produce the fittest crew in the PBA. Imagine each Kia player looking like a Spartan warrior after training under his watch. Possessing action figure-like bodies could definitely instigate the next big rivalry: The Six-Pack Boys of Kia vs. Extra Rice Inc. of Rain or Shine.

Oh, c’mon, who are we kidding? Have you seen his shooting form? It’s like he’s heaving a huge boulder to a vast ocean. He makes Shawn Marion look like a graceful ballerina.

Staying injury-free should be Pacquiao’s primary concern. He’s a megastar prizefighter for crying out loud! In the PBA, the ballers are bigger, faster, stronger, and a 100 times better than the guys he usually plays with in little pick-up games and pocket tournaments. The intense competition will surely push Pacquiao to the limit, increasing his chances of getting hurt. Sprained ankles, a torn meniscus, an ACL tear—from the most basic to the scariest ones—the risk is out there. If Pacquiao gets injured, it could lead to the end of doing what he does best, and it’s not making laws, people. Risking Pacquiao’s health is simply bad for the man, maybe worse for his fans, and definitely worst for the PBA, who’ll get the bulk of the blame for hurting the country’s most revered athlete.

Pacquiao, for all his athleticism, speed, and agility, attempting to become a professional basketball player and mentor still feels like an all-too-familiar mistake. How many star athletes have made a fool of themselves by crossing over to another sport that they have no business of being in? Sadly, it’s been far too many:

James Toney – Boxing to MMA
In 2010, Toney, Pacquiao’s fellow boxing legend and former Freddie Roach fighter, tried to bring his highly touted defensive style to the MMA. Unfortunately for the multi-division champion, his defense didn’t include stopping takedowns. Toney’s Octagon debut—his only appearance in the UFC—was a laugher as he got toyed around before getting submitted by MMA godfather Randy Couture less than a minute into the fight.

Riddick Bowe – Boxing to Muay Thai
Big Daddy Bowe recently joined the long list of former boxing champions who have fallen on hard times. Just a year ago, the once undisputed heavyweight king was seen tumbling all over a Muay Thai ring. Having no clue of what he’s doing, the out-of-shape Bowe succumbed to the punishing leg kicks of Russian fighter, Levgen Golovin in the second round of a one-sided bout. It was sad to see the 46-year-old heavyweight great wincing in pain as he struggles to get off the canvas.

Jose Canseco – Baseball to Boxing
It seemed like Canseco didn’t know what to do after calling it quits in the Major League. Deciding to get into boxing must’ve resulted from playing spin the bottle on one drunken night. It didn’t take long to figure out that the 6’4” homerun specialist doesn’t have the same hitting power when he’s swinging a bat. In his first three bouts, the six-time All-Star lost twice, both via first round stoppage. In all fairness to Canseco, it looked like he didn’t bring his PED-taking habits to boxing.

Tonya Harding – Figure skating to Boxing
Perhaps the most head-scratching crossover athletes ever, sports fans will never feel comfortable seeing her inside the ring. You could argue that Harding’s 3-3 boxing record is quite respectable, but still, the Sweet Science ain’t for her. There’s just something unpleasant in looking at a former ice queen turn into someone who smashes another woman’s face for a living. It was the culmination of her tragic downfall after being mired in the Nancy Kerrigan attack, easily the most controversial scandal in figure skating history.

Michael Jordan – Basketball to Baseball
MJ is a hoops god. He was sent here for one purpose and one purpose only: to rule over the court. That’s why when he tried to make a name for himself in baseball, his superb athletic powers failed him. He will always be mediocre with a bat compared to what he can do with a basketball. Yes, his stats with the Birmingham Barons indicated he had an upside, but he’ll never be part of the MLB elite. After a short stint, he realized he wasn’t meant to be on the diamond. He returned to Chicago and did what he was born to do: break Karl Malone and John Stockton’s hearts.

Pacquiao becoming playing coach could set as an ugly precedent in the PBA. Future expansion teams would easily point out Pacman’s case if they also want to use a popular fixture for publicity purposes. If Kia did it, why can’t we? Who’s next? Nonito Donaire Jr.? Django Bustamante? Bimby? What if Century Tuna gets accepted in the PBA, will John Lloyd become playing coach? In the end, the PBA will lose its credibility.

To be a competitor in the PBA, you’ve got to have talent. But more importantly, you should work for it. You’ve got to earn your stripes in the amateurs and developmental leagues. For the longest time, that has been the path to the country’s basketball apex (except for Dodot Jaworski though). Pacquiao’s direct ascent to the PBA, as playing coach no less, is a slap in the face or a jab to the groin of those who grinded their way and paid their dues to be in the league. Of all people, Pacquiao knows how difficult and exhausting it is to work your way up, he must realize that it applies to pro basketball as well. In sports, nothing should be served on a silver platter, even if you’re one of the most popular icons in the country, or even the world.

Really, can you imagine Pacquiao defending Jayson Castro? Or leading a three-on-one fastbreak? Or going for a lay-up against Greg Slaughter? The game is on the line, Kia is down by a point with only three ticks left, can you imagine Pacquiao designing a last-ditch play? We could go on and on, but the bottom line is, Pacman can’t play in the PBA. Well yes, technically he can, but you get our drift.

Knowing Pacman, he’s just unconsciously too naïve to realize that he’s not up to par with the PBA players. Not even with the ones on the injured list like Lester Alvarez, Raffy Reyes, etc. What above-average basketball skill does he have? At 5’7,” he’d be one of the shortest players and at age 35, one of the oldest. Most probably, he’ll just be a figurehead coach and delegate the Xs and Os to his deputies, but does he even know a basic offensive pattern at the very least?

Just to give an example, let’s take Macky Escalona. Like Pacquiao, he isn’t that tall. He plays the guard position. He’s fast and decently athletic. He was drafted by Ginebra but only got to play a couple of games. So if a guy like him, who was one of the better guards in the UAAP when he played for Ateneo, can’t even hold on to a roster spot, what more for Pacquiao, who can’t even shoot the ball properly?

It’s just unfathomable for Pacquiao to be a playing coach. It’s an insult, even.

Look, we love Pacman, but we don’t want him to be reduced to an amusing sidelight in the PBA. His legacy is in the ring and it should stay that way. You know?