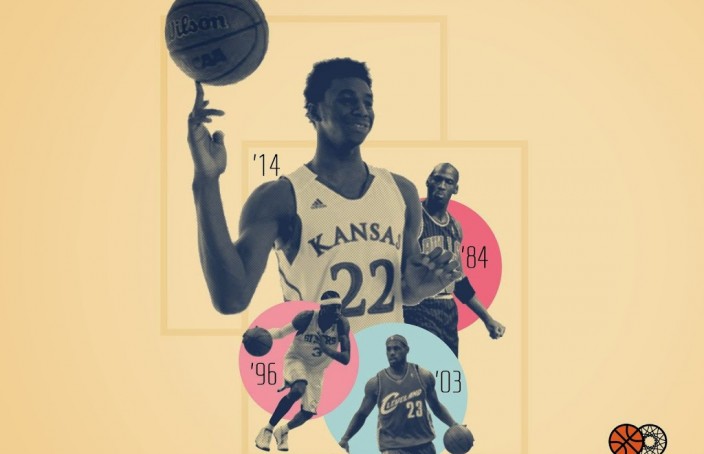 What do these years mean for the NBA? Historically, they’re considered the top draft classes of all-time. They produced stars, Hall of Famers, and legends. Household names like MJ, Chuck, Hakeem, John Stockton, A.I., Kobe, Steve Nash, Ray Allen, LeBron, Melo, D-Wade, Chris Bosh, and a host of other notable players who have gone on to have successful NBA careers. 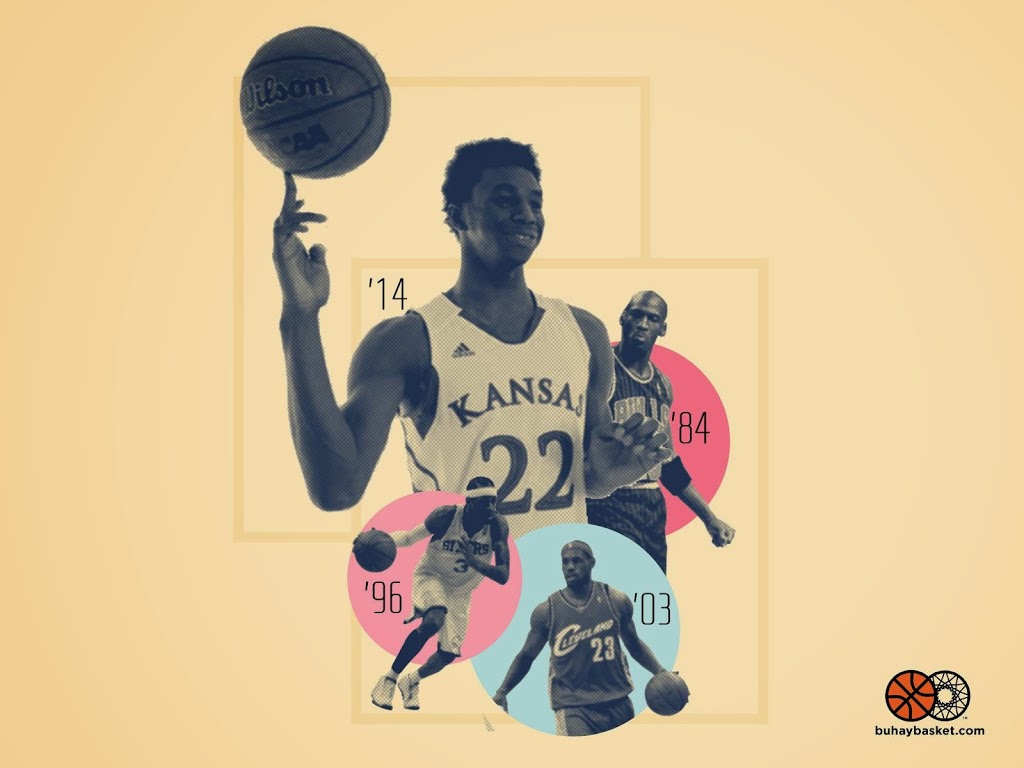 To be honest, I wanted to not care about this draft, seeing as my team, the Golden State Warriors, didn’t even have a single pick. But it was also difficult to not pay attention to the incoming talent. Kids, most of them one-and-dones, who are clearly NBA-ready and just needed to go to college for a year to be draft eligible. It was hard to ignore them from the time I saw mixtapes of them online, performing athletic feats or playing good defense, to the time when I watched college games just to see why these kids have the spotlight shining so bright on them.

Take Andrew Wiggins for example. Reclassified to the freshman class of 2013, expectations were high for the kid. Imagine the LeBron hype machine on a smaller scale, with a more decent jumpshot but without the point forward handles. You could also take a look at the guy previously ranked #1 in the freshman prospect list of 2013, Jabari Parker (usurped by Wiggins when he got reclassified), a Melo clone of sorts. The train definitely doesn’t stop there though.

Joel Embiid was an unknown African kid who migrated to the USA to play ball. He played volleyball and soccer growing up, with both sports honing his instincts to spike a ball and have beautiful footwork. The guy plays center, has an array of post moves, and is an excellent shot blocker. Quite impressive considering he didn’t even play basketball for half a decade. I’d actually be scared to drive the lane against the Sixers when he gets healthy alongside Nerlens Noel. Does Embiid’s story remind you of Greg Oden though?

Dante Exum, son of Cecil Exum, a former teammate of some bald, tongue-wagging dude who played for the Tar Heels in college and the Bulls (no, he never wore another uniform aside from those two, I refuse to believe he ever did). Clearly, playing ball is in his genes but I never thought that, this early, we could see the next Kobe. I’d definitely love to see how he and Trey Burke would play off of each other this season.

Many think he’s an undersized 4, but Julius Randle is a positive throwback to the good old days because of his post play and hard nose for the ball. Short armed but clearly hustles. Needs work on defense but extremely deceptive when running the floor and leaving other guys behind. If that sounds familiar to you, “The Round Mound of Rebound” Charles Barkley was also described similarly before he came into the 1984 Draft.

Noah Vonleh, 6’10,” great stats, has highest PER ever for a Hoosier freshman. Long, athletic, willing rebounder and shot blocker. Has a nice jumpshot from 15-19 feet and can occasionally hit the 3. Sounds a lot like that guy who joined LBJ and Flash in South Beach, right? Definitely, this kid offers the rechristened Charlotte Hornets a stretch 4 option and be the third threat behind Al Jefferson and Kemba Walker.

The Celtics also got themselves some keepers in 6’4” PG Marcus Smart, who many considered to have been a consensus top 3 pick last year had he declared for the draft, and James Young, the sniper from the Kentucky Wildcats. These two greenhorns are solid additions to a young core that already has Kelly Olynyk and Jared Sullinger a.k.a. The Poor Man’s Kevin Love.

The Kings chose Nik Stauskas, a white boy who can flat-out shoot the ball. As someone who’s watched a lot of Michigan Wolverines games the past two years (shouts to my boy, Mike Chueh), Stauskas has been a revelation this past season. Improved ball-handling, decent team defender, and good ball instincts. He should be a good fit for a team that barely made 3’s last season. Think Ray Allen, the white, Canadian version.

Meanwhile, in Windy City, Dougie McBuckets, government name Doug McDermott, brings a much-needed outside shooting presence and scoring punch to complement a hopefully healthy Derrick Rose. He’s not the most athletic guy or the best defender but he definitely evokes memories of another lights out shooter from the 2003 Draft, Kyle Korver.

All these guys have been tagged with comparisons from past or current players. But how good are they, really? Were they drafted in the right spots and by the right teams? Are they going to live up to the hype? Do you think that this truly can be the greatest draft class in history? In four months, we’ll find out the answers but for now, all we can do is sit and wait.