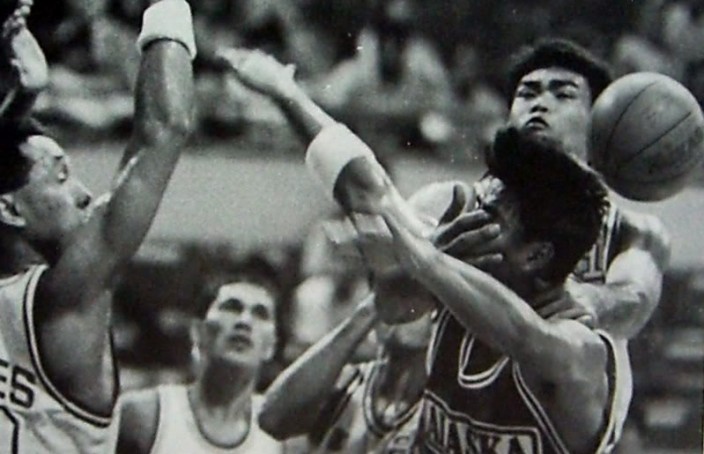 Tagged with Jojo Lastimosa, PBA
Spread the love
Since The Eraserheads are back together (or at least back to making that beautiful infectious music that we all missed), we thought it’s only apt to talk about another 90s icon, at least in local basketball.

Only, our subject didn’t make his awesome accomplishments by selling records. Instead, he won titles left and right in the PBA.

The Purefoods’ Big 3. Photo from jamesbangfiles.com

During the time of Tretorn and loose polo shirts, no PBA player won more championships than Jojo Lastimosa.

The sharpshooter out of Cagayan de Oro won a total of 10 crowns as a vital member of the Purefoods and Alaska, spanning 1991 to 1998.

What made the six-foot, mullet-haired guard even more special other than his legendary manly legs, is that he was always a key contributor in every championship run.

In his first title with Purefoods, he chipped in steady scoring to help his squad win the Third Conference. Jolas finished that year averaging 15.7 PPG.

In 1991, he was shipped to Alaska. The 1988 PBA ROY scored 22.5 PPG as he led the Milkmen to their first ever title—also in the Third Conference.

By 1996, Lastimosa was still one of the most feared marksmen in the league. His 15.0 PPG, including cold-blooded clutch jumpers, was integral in Alaska’s Grand Slam run.

The 90s was not a good time for the guy—it was more than spectacular!

These days, Jolas is frequently seen on TV as a basketball analyst. Arguably, he’s way better at shooting the ball than analyzing games. But if he works on it as hard as he did on his jump shot, there’s no question, he’ll make progress.