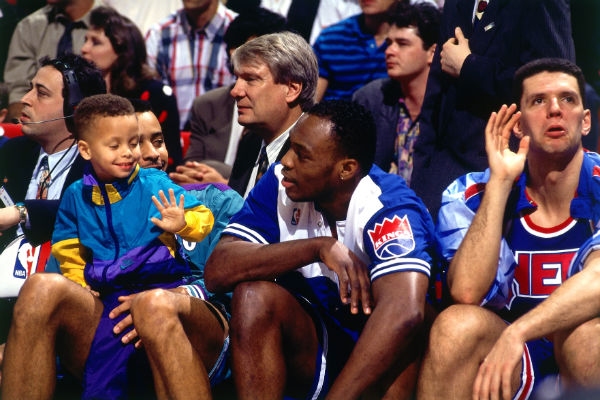  He makes game-winning 3s from 38 feet, and celebrates shots before they go in. But enough about Gilbert Arenas. This is about Steph Curry.

Eleven-time NBA champion coach and Knicks president Phil Jackson aka The Zen Master aka Basketball Gandalf is known to say bizarre stuff on Twitter like a crazy uncle (his first tweet was: “11 champ;ipnsikp[ ringhs”).

Recently, he weighed in on the phenomenon that is Stephen Curry, reminding us of a similar player who is absolutely in nobody’s list of Top 10 greats:

After a much expected backlash, he–sort of–defended his claim with this: 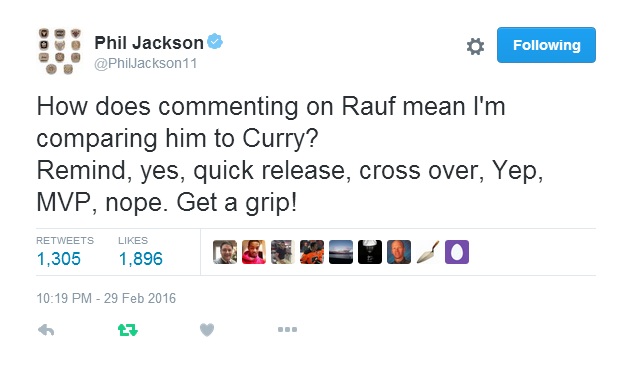 Mahmoud Abdul-Rauf peaked in the mid-90s, about the same time when Curry’s father, Dell, was playing in his best years in the NBA. So did young Steph steal some of Abdul-Rauf’s moves? Did he watch Nick Van Exel highlight reels in the 90s? Can we throw Gilbert Arenas’ name into the discussion?

Yes, we know how it goes: there is no other player like Steph Curry. But these shooters (no pun intended, Mr. Arenas) are probably the closest, based on the Phil Jackson criteria. Check out their highlights below and get back to us with your best crazy uncle argument. We’ll be waiting.

It seems Coach Jackson is still having nightmares from this game, which snapped the Bulls’ 18-game winning streak in ’96. That same Bulls team went on to win 72 games.

Here he is dropping 51 on John Stockton:

Great shooters, Curry included, will no doubt have to look up to one of the best to ever do it. Is Curry a better shooter though? Reggie Miller, not surprisingly, had this to say: “I’d take down Steph at my peak.”

Nick Van Exel had the handles, the pull-up 3, and the best moves before and after hitting the game winner, much like the reigning MVP.

Van Exel also shot free throws like this, which Curry should be doing soon, you know, to be fair:

His antics off the court were very un-Steph, but on the court, Gilbert Arenas shot the lights out ala Curry.

Curry got 50 percent of his moves from his father, that we know for sure. When told about Coach Phil’s Abdul-Rauf “reminder,” Dell Curry responded with this: