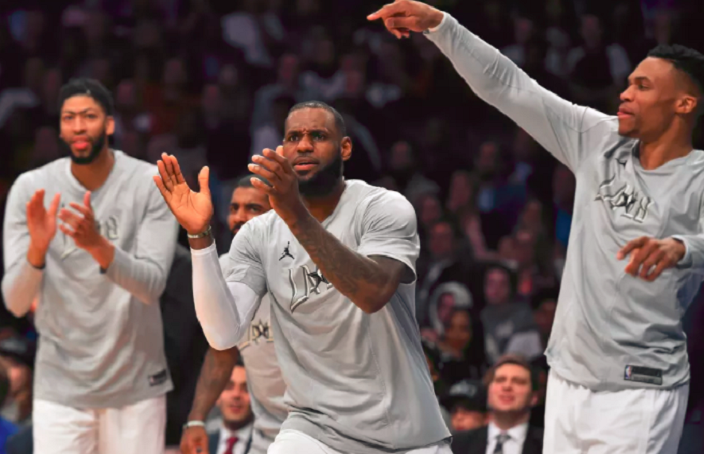 Fantasy basketball (and Fantasy Bucket) is on a loooong break, but that shouldn’t stop us from fantasizing about stats. Let’s look at the numbers from the 2018 NBA All-Star Game.

The 2018 edition of the All-Star Game was fantastic, at least the closing bits of it, when Team LeBron and Team Steph turned on the awesomeness with a flick of a switch (wish Fergie could’ve done the same).

Because things got super serious towards the end, the superstars—not you, LaMarcus Aldridge—were able to fill the stat sheet across the board with huge numbers. If only this buffet of stats meant something to our fantasy teams.

LeBron, at 33, was the oldest player at the All-Star Game and he showed his age by dominating the young ones. He almost notched a triple double with 29 points, 10 rebounds, and 8 assists to go along with 4 3s, a steal, and a couple of laughs with former teammate Kyrie Irving on the bench. He capped off his MVP numbers with 12 of 17 shooting from the field.

LeBron and KD was on the same team and it was unfair, as Steph Curry found out in the dying seconds of the close game. If they handed out a Second Place MVP trophy, KD deserved it with this busy stat line: 19 pts, 6 rebs, 5 assts, 3 stls, 1 blk, and 3 3s.

Embiid looked like a natural out there with the All-Star starters, and his numbers don’t lie: 19 pts on 8 of 13 shooting, 8 rebs, 2 blks and 1 stl. He also got his sweet revenge on Russell Westbrook in a sequence that was symbolic of how unique the 7-footer is: hitting a 3 on one end, then blocking a Westbrook drive on the other.

Lowry had a game high 11 assists, but shot only 2-11 and missed all 8 of his 3-point attempts, so he’ll have to share billing with Drummond, who hit all 7 of his field goal attempts, but did nothing else.

Klay Thompson is me when someone says “act natural” in a group photo pic.twitter.com/dgP1IKdwdX

Last year’s MVP didn’t bother to show up this year and played really, really terrible. He scored only 11 points and didn’t even get a triple double (8 rebounds and 8 assists). This is what happens when Westbrook loses his competitive edge.

The captain of Team Steph only hit 3 3s and committed a game-high 6 turnovers. In a game where defense was switched off for more than 40 minutes. That’s bad.

1 block. Is it true that he was picked last by Team Steph? This is why.

Green looked like he partied hard the night before, producing a poor (in Green’s standards) stat line of 3-5-2.

Fantasy Bucket: This Ish is Real