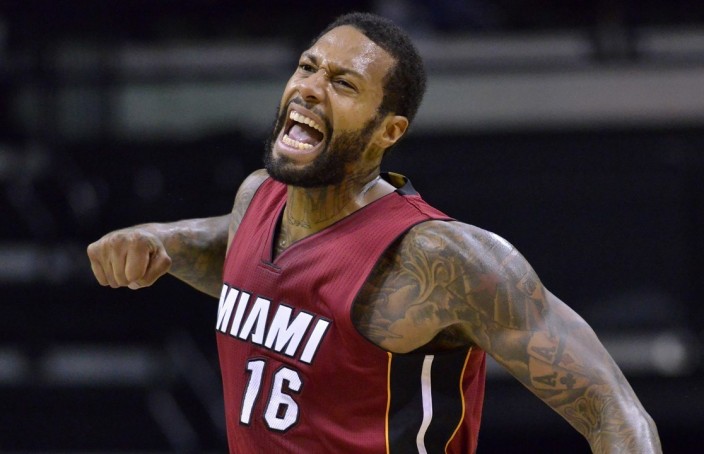 Another round of Fantasy Bucket means another batch of unsung fantasy heroes, those whose names a lot of casual fans probably don’t give a shit about, but savvy fantasy players covet. If you need to know how the ADs or the Hardens are doing, look elsewhere. This space is reserved for the Bartons and the Olynyks.

If, like me, you drafted James Johnson this season because of his stellar play last season, then you probably regretted it. Check out his numbers from 2016-2017: 13 points per game, 5 rpg, 4 apg, 1 bpg, 1 spg, and 1 three-pointer per game. And look at his numbers this year: on second thought, probably best to skip that because he pretty much sucked anyway, save for a sudden resurgence the past week. He recently dropped a season-high 31 points in a win vs Denver, where he also grabbed 11 rebounds and dished out 6 assists. The return of good JJ was a result of a meeting with Miami coach Erik Spoelstra, where they spent hours watching tape from the 2016-2017 season. You can’t find that bit of info on Rotoworld, folks. That’s exclusive on Google.

Have you ever been down 12 steals in H2H and was like, “I wished I had Al-Farouq Aminu on my roster”? Never, right? Which is why Aminu coming up with 13 steals in his last five games was such an anomaly (or if you did have Aminu in your roster, a blessing). Portland has been on a roll this season and a huge part of that is Aminu’s contribution of 10 ppg, 8 rpg, 1 spg, and 2 3s per game. Here’s another anomaly/blessing for you to ponder: Aminu is ranked Top 5 in the last seven days.

Will Barton gets the most heat for being an inefficient and inconsistent player for the Denver Nuggets. But each time, he rises above and responds the only way he knows how: get buckets. In his last three games, Barton scored 22, 16, and 23, just enough to shut the haters up. Let’s hope Barton can keep it up for the final 10 games of the season.

Kelly Olynyk is the type of dude you don’t really care much for until he puts up a 30-6-4 line off the bench. And then you’re like, “Oh, it’s a fluke.” Then in the next game he puts up 22-5-10 and then you’re like, “Okay, maybe he’s legit.” Then in the next game he scores 9 points on 3 of 7 shooting and everything goes back to normal. This is the Kelly Olynyk Experience—an exciting and unpredictable roller coaster ride. Enjoy the loops while you still can.

Marcus Morris has been balling lately the past few games, taking advantage of a resting, I mean depleted, Celtics roster. In a recent win against the Thunder, Morris was terrific with 21 points and 3 3s on 61 percent field goal shooting. He also hit the game-winning three-pointer with 1.2 seconds left to get the W for Boston. It was his first game-winning shot of his career. When asked if there was any hesitation, Morris said, “I don’t even know how to spell hesitation.” But after the game, the NBA said in its Last Two Minute report that the Markieff lookalike committed a five-second violation then travelled before the game-winner, so it shouldn’t have counted. Someone should ask him if he could spell “turnover.”